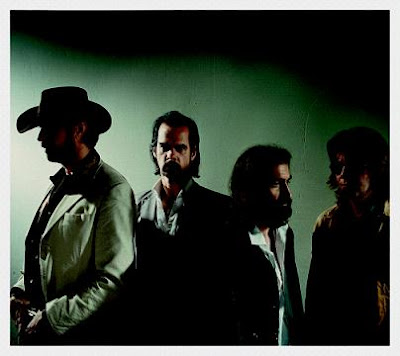 As I listen to Grinderman, Nick Cave’s new band, and I reach into my bag of adjectives, I find: It’s a hairy, scary band. It’s a raw, powerful band. It’s a fierce, primeval band. It’s the sound of a man, and a band, who are reinvigorated.

Nick Cave, Warren Ellis, Martyn Casey and Jim Sclavunos had all performed together previously as part of Nick Cave and the Bad Seeds, and the fact that this band is billed as Grinderman and not Nick Cave and The Bad Seeds should not be overlooked. During the past couple years this slimmed down version of the Bad Seeds have been jamming, touring, and working out this new model. It’s a more colloborative effort than it has been in the past as it’s no longer a man and a backing band, but an honest to goodness, shredding rock and roll band.