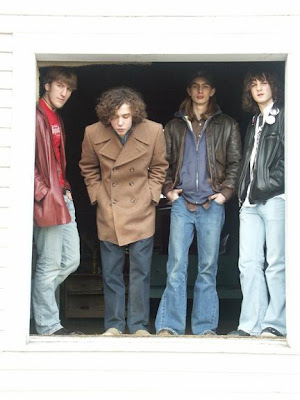 Here in Clevo we have a form of music that we affectionately called Rust-Belt Rock and Roll. It’s less of a genre and more of an attitude. It’s rock and roll music that’s low on style and bullsh*t and big on volume. We live in a region that is gritty, hard-working, and honest. Outsiders may only see high poverty, smokestacks, and empty factories, but for us, there’s a level of pride in being down but not out and fighting with every last breath to succeed. We like our rockers to share those same ideals.

Here in Clevo, we also have this band that perfectly emobdies the sentiments of Rust-Belt Rock, The Black Diamonds. Originally a duo that blasted blues based jams out of a barn in Perry, Ohio, The Black Diamonds, now a four piece, released their full length debut in 2006. Listening to The Black Diamonds, you’ll hear elements of old time blues music as well as large riffs and bombastic drums that date back to the hard chargin’ Seventies. Though their influences reach back to a bygone era, they’re not throwbacks to better days, and they can’t simply be labeled as Sabbath and Zeppelin revivalists. The fire and the passion of their Rust Belt Rock and Roll takes their sound right into modern times. Rock.

MP3: The Black Diamonds – I Got A Feeling

The Black Diamonds will be playing the Hi-Fi in Lakewood this Saturday night. Also, a follow up to their full length debut, should be out some time in 07.