Never Hear The End Of It by Sloan

It’s time to welcome back The Rockometer. During the past month, The Rockometer has been undergoing some much needed maintenance. You see, this guy I know, thought it would be a good idea to plug a Bette Midler disc into The Rockometer. No, that guy wasn’t me. Yes, it nearly caused irreparable damage. No, that same guy didn’t try to put a Barbara Streisand cd in The Rockometer. I, err…I mean, that guy would never be so foolish.

Honestly, you can’t underestimate how important it is to have a powerful rock and roll reviewing machine in times like these. It’s a job I can’t handle on my own. If it wasn’t for The Rockometer, these reviews would be nothing more than how many ways could I say awesome in one paragraph. 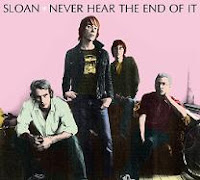 Sloan
Never Hear The End Of It
Yep Roc

Sloan have always been more popular in places like their home town of Halifax, Saskatoon, or Banff, than places like New York, Chicago, or LA. During their 15 year career, they’ve achieved hero status in their native Canada. Their 1994 release, Twice Removed, while overlooked in the states, was voted the best Canadian album of all time in Chart! magazine. The first single off of their latest album, Never hear The End Of It, the infectious rocker, “Who Taught You To Live Like That,” set first week sales records on the Canadian iTunes store. Still, despite these records and accolades, in the good old US of A, Sloan have never made it past cult status. They’re loved by critics and those in the know, but the rocking public has yet to fully catch on. Maybe you can blame it on the labels. Since 1994’s release was f*cked up by Geffen, the band have never had a consistent US record deal. Maybe, it’s the fact that many years ago, Sloan decided not to worry about trends in the rock scene, but instead, decided to remain true to their song craft. In the past 15 years, we’ve seen grunge, alternative, nu-metal, jam bands, emo, and dance punk bands all rise and fall in popularity, while Sloan have stuck to melodic power pop.

Perhaps, all of this would explain why Sloan chose one of the strongest songs on Never Hear The End of It, “Fading Into Obscurity” to ponder their own legacy. Against a tune that moves seemlessly between Magical Mystery era Beatles, 70’s power pop, and 90’s jangle pop, you hear lines like: “I made a name for myself when one could do such a thing/A career that is held together by string/So I choose to cherish those that believe there’s some purity/To fading into obscurity,” and “I’m unable to tell if I know who I am/ a modest success/ a shill or a sham /I’m not afraid of what I’m made of /but my trajectory has me fading into obscurity.”

Popular opinion in the music press suggests that the title, Never Hear The End of It, is itself a reference to the sheer volume of the album. At 30 songs and 77 minutes it can appear rather daunting. Sloan do their best to keep it moving at a good clip by mixing in short, loud, and raucous numbers like, “Something’s Wrong,” “Blackout,” “HFXNCHC” and “I Can’t Sleep” between the more traditional Sloan fare. Additionally, the breaks between songs are either minimal or non-existant. This mixing strategy gives the album a fun, and spontaneous feel to it. It’s as if the band sat down and played all 30 songs in one marathon recording session, one right after the other.

An alternate explanation for the album title, and the one that I prefer, is that the “It” is not the album, but the band, and instead of never getting to the end of the album, we’ve yet to hear the last or the best from Sloan. After all, this is their strongest output since 98’s Navy Blues and 99’s Between The Bridges. I’ll put the bouncy pop of “I Understand,” the spaced out balladry of “Listen To The Radio,” the blistering rock of the lead single, “Who Taught You To Live Like That,” the whimsical and playful, “Set In Motion,” and the slow and poignant, “Live The Life You’re Dreaming Of,” against anything off of those albums.

After giving Never Hear The End Of It quite a few spins, a couple things are readily apparent. First of all, Sloan are hardly the ones to fade into obscurity. Even, when they’re contemplating their place in today’s music scene, as in “Fading Into Obscurity” they admit in the last line that they’re “In good company.” Sloan is out of line with the mainstream, and anyone who has half a head on their shoulders is out of line with mainstream rock music these days. We’re fighting the good fight together. Secondly, with Sloan back at the top of their game, I never want to hear the end of it, and I have a feeling that once this one gets stuck in your player, you won’t want to hear the end of it, either.

MP3: Sloan – Who Taught You To Live Like That

Sloan is rewarded for their strongest work this decade on Never Hear The End Of It with a rousing 8 1/2 out of 10 on The Rockometer.