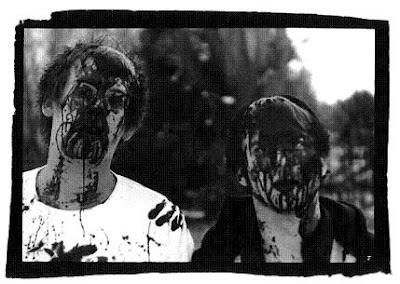 Where do I start? “Pink Muff Dance Party Vampire Resolve.” I have no clue what it all means. It could be one helluva good time, or, it could be super scary dangerous. Musically, this tune is split in two. The first half, the Pink Muff Dance Party, is a funhouse disco party with helium fueled vocals. It’s some truly strange sh*t. The second half, what I’m assuming to be the Vampire Resolve, moves towards Grandaddy type futuristic space rock. When you add these two parts together, you get something truly different. Surprisingly, I’m really drawn to these guys. They may be on another level, or another planet, but there’s some skills in that “Pink Muff Dance Party Vampire Resolve,” that I can’t deny.

Now, if you find yourself scratching your head at the Pink Muff Dance Party, trust me here, wait for the Vampire Resolve, and it’ll make some sense. Ok, maybe it still won’t make any sense at all, but it’ll definitely make something, and perhaps that something is something that you’ll want to listen to again. Hey, it sucked me in.

The debut by Detroit’s Dead Bodies will drop on Quite Scientific on February 3rd. There’s more tuneage for your listening enjoyment at myspace.