Lord Have Mercy On The Mooney Suzuki 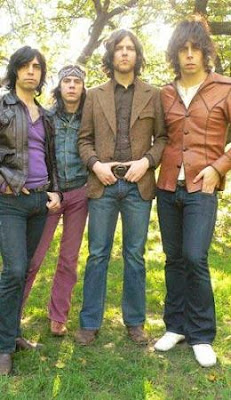 Lord, have mercy on The Mooney Suzuki. The band were left for dead after the major league fiasco that was their major label debut, Alive and Amplified, on Columbia. Zero promotional support, as well as the questionable decision to have mainstream hit-makers, The Matrix, handle the production duties caused the Mooney Suzuki to go from the next big thing to the bargain bin. Then when things couldn’t get worse, guitarist Graham Tyler’s father passed away from cancer.

At the lowest point, a strange thing happened to The Mooney Suzuki. Singer Sammy James, Jr, went back to his roots, and started writing songs based on his affinity for 50’s and 60’s rock and soul. The band’s original drummer, Will Rockwell-Scott, came back in the fold, guitarist Graham Tyler, returned as a tribute to his late father, and they signed a new deal with v2 records. V2 reissued the fantastic Maximum Black EP last fall and the new full length, Have Mercy was due to be released early this year

Now, for the surprise ending. V2 records is no more, and The Mooney Suzuki appear to be in label limbo once again. I had been spinning Have Mercy quite a bit these past few days. It’s not quite the bombastic garage rock that the band were known for in their early days, as the band shifted their focus from building large sounds to building quality songs, but I still found it really enjoyable.

This new, stripped down, and streamlined direction of The Mooneys calls to mind another famous NYC act, who found themselves in the middle of a mid-band-life crisis, The Ramones, who almost didn’t make it out alive when they were recording 1980’s The End Of The Century. While The End of The Century, remains one of the great, overlooked albums by The Ramones, Have Mercy may have the fate of being one of the great, unheard albums by The Mooney Suzuki. The Ramones influence is all over Have Mercy, with the band name dropped on “Rock ‘N Roller Girl,” a “Needles and Pins” reference dropped later in the album, and the tune “First Comes Love” sounding like it could have come straight from The End of The Century sessions.

At this point, I have no idea when/if Have Mercy will be released. If you’re in the know and want to let us know, please chime in. In the meantime, let’s rock two of the finer cuts off of Have Mercy.

MP3: The Mooney Suzuki – This Broke Heart of Mine