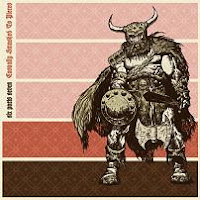 These days I can’t go far without the Six Parts Seven. Driving in my car, Six Parts Seven have become segue kings on NPR. At my desk at work, Six Parts Seven come out of my speakers beaming from KEXP in Seattle. When the day is done, and it’s time to rewind, I can take comfort from that sound aroused from the stereo speakers.

Casually Smashed To Pieces is the Six Parts Seven’s fifth release for Suicide Squeeze and is also their most focused work. It’s normal, and maybe expected, for many of today’s post-rock releases to stretch comfortably past the hour. You know how it goes — a little time for knob tweaking, a little time for feedback, a little more time for the knob tweaking, and then the coup de grace — the four minute outtro. Bucking this trend, Six Parts Seven package 8 tracks in a neat little thirty minutes, and still give the listener plenty of time to close their eyes, open the ears, and let it all sink in.

“Conversation Heart,” a slow guitar and banjo number opens, Casually Smashed To Pieces, then bleeds comfortably into “Stolen Moments,” where a lone cornet scales effortlessly above carefully separated guitar, keyboard, and drum lines. Herein lies the beauty of the band. Taken individually, each part of “Stolen Moments” sounds simple. Yet when that single key on a keyboard, or that solitary pluck of a guitar string, is integrated into the larger framework of the band, they become both necessary and elegant. Similarly, it’s not guitar virtuosity that makes “Knock At My Door” a compelling number. Instead, it’s the manner in which the guitars involve themselves in this little game of cat and mouse, weaving in and out of the song from the front of the mix to the back, seemingly challenging each other for prominence only to be briefly overtaken by a much larger wave of sound. Highlighting Casually Smashed To Pieces, is the aptly named “Confusing Possibilities” where a recurring melody is staggered and layered amongst guitars, keyboards, and horns, appearing alternately in one instrument, then the other, until there’s crescendo and they are all part of the same sustained movement.

There’s a reason whey words like disposable are so common in music crit, and compliments like pleasant, and enjoyable are so rare. Our ears are bombarded by sounds, our eyes take in too many ads, as hit songs can either start as or end up being Budweiser jingles. The music we want to hear is elusive, while what we can do with out, stalks us at every tv set, every open car window, and every shopping mall. When disposable commercial pop chases you around town, your ear drums are prone to attack from the nearest pair of scissors. Well, at least mine are. Conversely, having the delicate, post-rock melodies of Six Parts Seven soundtrack your day produces a rare feeling, and a welcome feeling — that moment of silence when the music stops, and you know there’s no choice in the matter. You’re going to listen again.

Casually Smashed To Pieces: 8 out of 10 on the Rockometer.