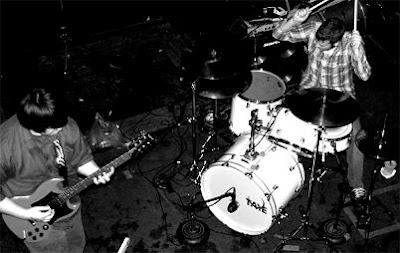 From the land of polar bears, moose, and ice, and from the bloodlines of Broken Social Scene, come Do Make Say Think with a new album, You, You’re A History In Rust, due out in the near future, and a Cleveland stop at The Grog Shop on their forthcoming tour. Unfortunately, Do Make Say Think’s last time in town, was marred by the mass of chattering chatters at The House of Blues, and their complexly, melodic sounds were lost amidst hipster gossip. Thanks to the magic of mp3s, headphones and quiet spaces, you’ll find DMST much more enjoyable without that incessant background chatter.

Somme (pictured above) is the work of 20 year-old guitarist, Daniel Medina, and drummer Kenny Preski, from that post-rock haven of Chicago. Their debut ep, Weight, was recorded live in one day on analog equipment in Steve Albini’s Electrical Audio Studios with engineer Greg Norman (High on Fire, Pelican, Mclusky, Magnolia Electric Co.) manning the boards. The results are crushing as Medina lays down lush, long guitars while Preski pounds the sound of impending doom on his kit.