Warning: "continue" targeting switch is equivalent to "break". Did you mean to use "continue 2"? in /nfs/c06/h01/mnt/88637/domains/blog.irockcleveland.com/html/wp-includes/pomo/plural-forms.php on line 210
 I Rock Cleveland I Rock Cleveland | Dragged Out by The Lindsay

Dragged Out by The Lindsay 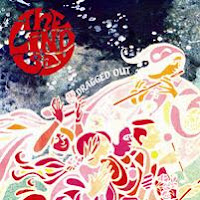 The Lindsay
Dragged Out
Manup Music

Can someone in Columbus explain this to me? Where did all this wonderful noise come from. The last band to appear on the Rockometer, Church of The Red Museum, scored high marks for their gypsy killing rock ‘n’ roll. Additionally, I Rock Cleveland has been closely chronicling the rise of the lo-fi noise, rock machine, Times New Viking, as we near their second release. Now, we have Dragged Out, the debut album from Columbus, Ohio’s, The Lindsay, and their droning, noisy psychedelic rock.

Anyone with a working understanding of the noisier side of Nineties indie and alternative like Sonicy Youth, The Pixies, The Breeders, or Pavement, or a familiarity with modern droning psychedelica like The Black Angels or The Low Frequency in Stereo, should have a good reference point for where The Lindsay are coming from. The guitars shift static to squealing, the bass is fuzzy, and the drumming is heavy and tribal.

The Lindsay succeeds when their admiration for Black Francis and Kim Deal, or Thurston Moore and Kim Gordon, is just that, admiration. The opening cut, “Life is Fair” opens with a sparse arrangement of heart-pounding drum beats and skittish guitars. There is a sense of anticipation, or worse, anxiety building through the song. It’s not a question of if you’ll hit a wall of sound, but when it will come and how hard it will hit. By the way, it hits hard. Guitarists John Olexovitch and Tom Schmidt engage in an epic feedback battle, while bassist Gretchen Tepper and drummer James Lavery do their best to keep the chaos in check. Elsewhere,

“Abigail Folger” is bit more nuanced (if that word is even possible when dealing with squelches and squeals) as its driven by the marching rhythms of Tepper and Lavery, while the guitar attacks are scaled back a bit and saved for the chorus and the outro. Possibly, their most straight-forward number, “Iranian Eyes,” is able to bury its melody underneath their trademark scuffling guitar squalor without destroying it in its entirety. The result is a song that works equally well with a careful listen as it does from a distance.

Occasionally, the band will fall into the trap of idol worship and imitation. “Ready to Run” is a little too close to “Goo” era Sonic Youth for comfort. The main guitar riff sounds a little too familiar. Olexovitch sounds a little to close to Thurston Moore, and Tepper, teeters dangerously close to being a clone of Kim Deal. Thankfully, those scant moments of imitation are the exception rather than the norm. Both the hard driving “Back of My Hand” and the slow droning “High Heavens” have enough of their own stamp on it to keep this set sounding fresh.

The Lindsay continue the trend of noisy rockers out of Columbus, Ohio, releasing solid gold records. Dragged out scores 7 1/2 out of 10 on The Rockometer.