From The Vaults of I Rock Cleveland: “Super Fire” by Girls Against Boys 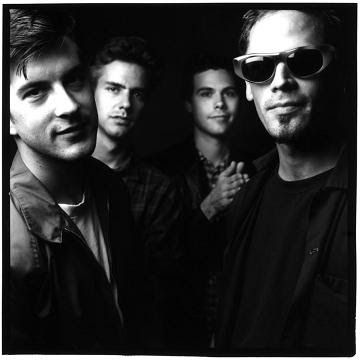 The year was 1996, the album was House of GVSB, the third release on Touch and Go by the NYC via DC band Girls Against Boys, and the song rockin’ my lame ass was “Super-Fire.”

According to legend, Girls Against Boys, grabbed their antagonistic name from the state of the DC hardcore scene in the late eighties while playing under the name Soulside. It’s an interesting little factoid, since I can’t think of many band names that suits the players as well as Girls Against Boys does for Eli Janney (Bass), Johnny Temple (bass), Scott McCloud (vox and guitar), Alexis Fleisig (drums).

Scott McCloud had one of the coolest voices in nineties indie, right behind Greg Dulli of The Afghan Whigs, and the band’s double bass attack along with Mc Cloud’s soaring guitars, gave a real swagger to their sound. It seamed as if every mention of the band during the mid-nineties mentioned had to mention that sex and swagger. The boys wanted to be like them, and the girls wanted to get with them, and “Sure-Fire” was the near-perfect embodiment of the sex, swagger, danger. Just listening to this song again makes me feel like I could kick any dude’s ass in the room, and then on my way out the door, get any woman I want. They’re that kind of band.