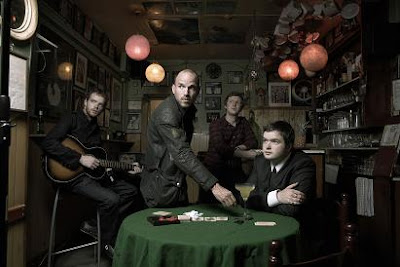 Beatific Visions, the follow up to Brakes (Brakes Brakes) brilliant debut, Give Blood, had been been released in the UK last fall, but stuck somewhere in US label purgatory, preventing it’s release state side. Then, earlier this year, World’s Fair acquired distribution rights to Brakes as well as some other Rough Trade artists including Jarvis Cocker, The Veils, and British Sea Power. So, finally, we have May 8th release date for Beatific Visions. Unfortunately, as a result of a band in the states already having the name “The Brakes,” Brakes now have to go by the unwieldy name Brakes Brakes Brakes. You can always do as I do, and show disrespect to the second and third brakes by surrounding them in parentheses, or you can also go the more direct rout and ignore the second and third brakes all together.

In the end, whether it’s Brakes, Brakes (Brakes Brakes), or the legal name of Brakes Brakes Brakes, it don’t make a damn bit of difference, with the tunes still being really f’n solid. Though I’ve previously referred to Beatific Visions as a more cohesive and controlled affair, I don’t want you to get the wrong opinion. The songs still bite and Eamon Hamilton still has a good bit of venom on the tip of his tongue. The main difference being that instead of 16 songs clocking in at under 30 minutes, there’s 11 songs and 30 minutes. Check out side one track one, “Hold Me In The River,” and mark that date of May 8th on your calendar.

MP3: Brakes (Brakes Brakes) – Hold Me In The River