Live B-Sides and Rarities by The Black Angels 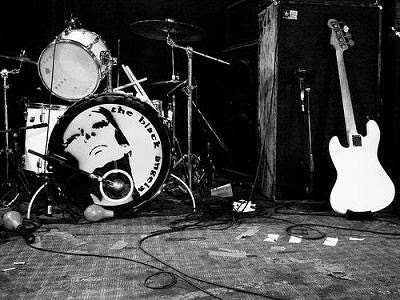 I was asked the other day, “Why haven’t you talked about The Black Angels in a while?” To which I replied, “Damn good point.”

Let’s talk about The Black Angels. If you’re from the Cleveland area, chances are you remember the night of November 18th. Earlier that day the Ohio State Buckeyes defeated the University of Michigan in a thriller, and Ohioans across the state had dreams of a national championship dancing in their heads. It’s also memorable for the sold-out homecoming show on The Black Keys fall tour with The Black Angels. This was the show that catapulted The Black Angels to the top of the 2006 rock class. Previously, I had seen The Black Angels in a small room with a small soundsystem, and I was blown away, now in the big room, with a massive soundsystem, The Black Angels put together a show that was mesmerizing, powerful, and unforgettable.

The Black Angels were the second band that night, and by the time they took the stage, many in attendance were already well lubricated with booze. Early in the set you can hear O-H, I-O chants from the sports fans in the house (to which my friend Jeff replied, “Keep that sh*t in the sports bars).” Turns out, that wasn’t the only bit of wisdom my fellow rocker gave me. I also remember him mentioning that he couldn’t wait to see what the Black Angels do on album number two. He’s right, you know. There’s some bands where you know they’ll have trouble following up their debut, but for the Black Angels, you get the feeling that their first album, Passover, is only the beginning. From their 10 song set, they played three new songs, ” Ronnettes,” “Vikings and Furrs,” and “You In Color,” as well as a cover of The Velvet Underground’s classic “All Tomorrow’s Parties.”

The full set from the Black Angels performance on November 18, 2006, at the sold-out Cleveland Agora opening for The Black Keys, can be downloaded from The Internet Archive.

In other Black Angels news, the band are currently finishing up their European tour with The Black Keys and will be back in the states in time for SXSW. Then, they will be hitting the road again with Vietnam. Included in this tour is a date April 2nd at The Beachland Tavern. Finally, Light In The Attic will be releasing a new 7″ single for “Better Off Alone” later this Spring.

The Black Angels
Light In The Attic