Warning: "continue" targeting switch is equivalent to "break". Did you mean to use "continue 2"? in /nfs/c06/h01/mnt/88637/domains/blog.irockcleveland.com/html/wp-includes/pomo/plural-forms.php on line 210
 I Rock Cleveland I Rock Cleveland | Riff-Tastic Rock and Roll From The Doctor Teeeth 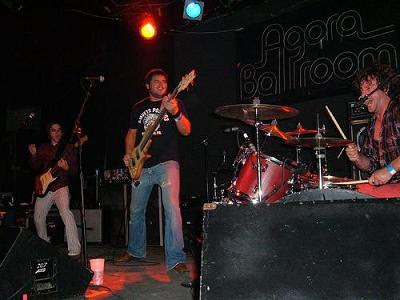 The Doctor Teeeth are a band on a mission. They formed in 2003 in Kent, OH, and from day one they were set on that mission to make rock and roll fun, exciting, and relevant again. Their riff heavy Rock ‘N’ Roll, draws inspiration from legends like Sabbath as well as new school rockers like Queen of The Stone Age, and true to their rust belt roots, secondary attributes like image and fashion take a back seat to that good, honest rock music.

Cuts like “Ramblene” and “Groovy Shade” have been in heavy rotation at IRCWHQ the past couple months, and for good reason: Bassist James Burge, Jr, can lay down these killer, jazzy lines, guitarist Rusty Boyer has a knack for thick, sludgy, and massive riffs, and drummer David Leland Horton can pound the drums with the best of them.

The Doctor Teeeth have a busy month of March lined up. This Friday night, they’ll be at the Cambridge Room at the HOB with The Living Stereo. Sunday night, it’s on to the Agora and an opening spot for Wolfmonther. They also have dates scheduled March 16th at The Hi-Fi and March 28th back at the Cambridge Room. If you’re a Cleveland Rocker, there’s no excuse for not getting your rock fix from the good doctors.