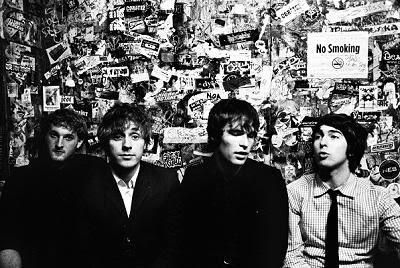 Before we get to talkin’ about Locksley, let’s take a trip in the way back machine to the year 1994, and the movie Backbeat, a film that chronicled early period Beatles while they were in Germany. For the Backbeat soundtrack, an all star cast of musicians was assembled: Dave Grohl (Nirvana, Foo Figthers), Dave Pirner (Soul Asylum), Greg Dulli (Afghan Whigs), Mike Mills (R.E.M), Thurston Moore (Sonic Youth) and Don Fleming (Gumball). This should have been the best soundtrack ever — some of the nineties most respected musicians cranking out new versions of old rhythm and blues. It wasn’t.

I tell this tale, because as I’m listening to Locksley, a band on the up and up out of Brooklyn, I keep thinking back to what Backbeat should have been, and what it wasn’t. I wanted to hear an energetic, raucous take on those early sounds, not a room full of talent and a bland re-creation.

Locksley’s debut full length, Don’t Make Me Wait, is exactly the type of album I expected years ago: thirteen quick hitting garage rock songs flavored with classic r&b, played at punk rock velocity with loads of handclaps, memorable choruses, tight harmonies, and catchy guitar hooks around every corner. You can tell these rockers had loads of fun laying this one down: the production is loose, frantic, and spontaneous, and when frontman Kai Kennedy is feelin’ it, he has no choice but to holler and scream in the mic.