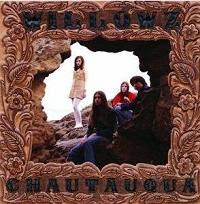 You can blame or thank bands like Wolfmother for this latest rock resurgence, either way, in the past year it’s become all right to be a band and play straight up rock music again. I tend to thank them nightly while I offer up sacrifices to the rock gods, but that’s just me. Chautaqua, the third disc from The Willowz, is Rock ‘N’ Roll free of slashes, dashes, and extra adjectives. It’s not punk rock, post rock, or dance rock. It’s only Rock ‘N’ Roll, and as the Rolling Stones so famously said years ago, I like it.

A police siren punctuates the opening bars of “Beware.” Consider it your warning for what follows is a whole lotta rock. There’s nothing fancy or stylish about it: big drum beats, pounding rhythms, and even bigger guitar riffs. On that opening number, singer/guitarist Richie James Follin boasts what turns out to be the mantra for The Willowz, “You’re gonna’ feel it when it hits.” Man, do I feel the rock when they kick it on numbers like “Nobody,” “Evil Son,” “Siren Song,” and “Choose A Side.” Now, while there may be nothing fancy about it, when rock music is done this well, it is refreshing, uplifting and life affirming.

Near the end of the disc The Willowz lose some of their steam as the big, boisterous rock and roll is moved to the back burner in favor of mellower, country-tinged psychedelica. There’s not necessarily anything wrong with this, except that in terms of the album, they could have sequenced some of these numbers in between the rockers to produce a more cohesive disc. Even in what many consider the mp3 single age, proper sequencing is still important. I’m willing to let it slide this time, but only because, the first 40 minutes are so damn strong, and when they combine sunny psychedelica with some of that dirty rock, as they do on “All I Need,” and album closer, “Lonesome Gods,” it results in some of their most stirring work.

Chautauqua by The Willowz rocks a very solid 8 out of 10 on The Rockometer.