Warning: "continue" targeting switch is equivalent to "break". Did you mean to use "continue 2"? in /nfs/c06/h01/mnt/88637/domains/blog.irockcleveland.com/html/wp-includes/pomo/plural-forms.php on line 210
 I Rock Cleveland I Rock Cleveland | Radio Moscow 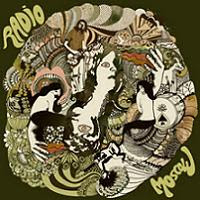 Radio Moscow is a story that proves Rock ‘N’ Roll dreams can come true. This Ames, Iowa, duo, guitarist/drummer/vocalist Parker Griggs and bassist Luke McDuff, (now a trio with the addition of drummer Mayuko), came to the attention of The Black Keys’ Dan Auerbach when Griggs and McDuff handed him a demo after a Black Keys show in Iowa. Auerbach was so impressed that he produced and engineered their debut album and helped them land a deal with Alive Records.

There’s another story to Radio Moscow, and that’s the emergence of a new guitar hero — Parker Griggs. Man, if that riff rifling six-string could talk, it would surely say, “Look out rockers, there’s a new sheriff in town.” Just consider the four minute guitar odyssey of “Frustrating Sound.” McDuff supplies the low rumbling bass line, and Griggs supplies a hefty dose of the blues. Then, just as you have him pegged as a Black Keys prodigy, the dude absolutely goes off into rockabilly, punk, and thrash in one solo. Therein lies the power of Radio Moscow’s debut. It’s easy to draw the Black Keys comparisons, or as others have done, trace their lineage to Cream, or the Jimi Hendrix Experience, but the way Griggs handles that guitar transcends those comparisons. He’s not confined to the blues, but rather, uses it is a launching pad for all sorts or sonic explorations.

Do yourself a favor. Put down that video game controller, and instead of pretending to play Sabbath and Deep Purple, turn up your stereo and bask in the power of mighty guitar work Griggs supplies on these tunes: “Lucky Dutch,” “Mistreating Queen,” “Whatever Happened,” and “Fuse.”

Radio Moscow’s Self Titled Debut awakened the guitar god out of me to the tune of an 8 out of 10 on The Rockometer.