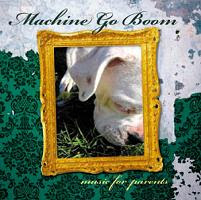 On the surface, the title of Machine Go Boom’s latest cd, Music For Parents is a bit misleading. The ramshackle indie pop of Machine Go Boom probably wouldn’t sit well with my folks — I seriously doubt my mom would play Machine Go Boom after her favorite Shania Twain album. However, look a little deeper, and consider the themes of youth that are prevalent throughout Music For Parents: the wild eyed wonder that comes with new experiences, the times of confusion and despair, and being in love, losing your love, and feeling like you’ll never love again, and it does have meaning for both young and old.

Drawing inspiration from Lewis Carroll’s The Adventures of Alice in Wonderland, and its duality of fantasy and peril, Music For Parents begins with the mystical “Small,” where vocalist/guitarist Mikey Machine details how “The grass blades standing before you/Seem so incredibly tall,” and the “The dark clouds loom up above you/But then again, you don’t see them at all/’Cuase you’re small.” In addition to thematically setting the stage for the rest of the album, “Small”, also displays a new diversity in instrumentation and arrangements for Machine Go Boom. It’s lush, moody and atmospheric – acoustic guitars are delicately plucked, rhythmic congas beat off in the distance, and Machine’s vocals are chanted in a trance. This new sense of adventure is further evidenced by the dirge-like “Oh My” with its backing of strings and woodwinds, and the gypsy-folk vibe emanating out of “Parents.”

Now, if you’re a long time fan of Machine Go Boom, you shouldn’t feel threatened by these numbers. While they have grown up considerably since 2004’s Thank You Captain Obvious, they have not abandoned the hyperkinetic pop of rapid fire guitar chords, and swirling keyboards that originally made them a favorite on the local scene. Do you remember that slow, brooding number, “Small?” Well, it runs right into the helium fueled “Build Me a Ladder,” then the six cans of Red Bull on a road trip, “All The Way to PA.” Should the words dirge and Machine Go Boom, make you shudder, you’ll be thanking your lucky jumping beans and back to bouncing of the walls in no time, as it’s quickly succeeded by wildly infectious “Mummy (Oh My)” and the rocket-powered pogo of “Quarantined.”

Ultimately, it’s this juxtaposition of age and maturity with the uncontrollable vigor of youth (often within the same song), that makes Music For Parents so compelling. “Parents” may musically sound grown up, but thematically, it deals with young lovers running away. Or, consider the circus carnival sounds of ” M.I.A.,” and how it hides fear and death behind a clown disguise. Parents, young adults, and teenagers can all learn a valuable lesson from this album: getting older may mean dealing with grown-up problems, but it doesn’t mean that you have to stop having fun.

Machine Go Boom’s Music For Parents bounced it’s way straight to the heart of The Rockometer. 7 1/2 out of 10.

Please note: A review very similar to this one will run in Cool Cleveland this week. CC and I are cool like that.