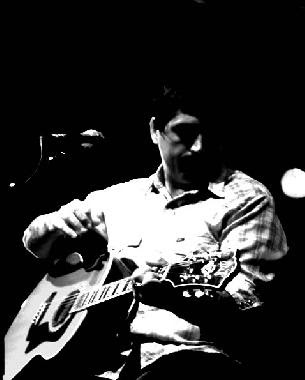 It’s the kind of mood I’m in. First, fatigue set in, then my sinuses went on the fritz when the weather went from seventies to thirties in the span of 24 hours. What I’m saying, is that I’m a bit down today, and in the mood form some good, honest songwriting, and this new disc from Brandon Butler, Lucky Thumbs, does the trick. With 8 tracks of pained strummers and whiskey bottle rockers, it’s either the cure for what ails me, or the sound to keep my down.

“Sparks” is the lead number on Lucky Thumbs, and all it took was to hear that rugged, back country guitar riff, followed by some down home harmonica, mixed with Butler’s rough and scruffy voice, and I was hooked on this back country stomper.

“Happy Sound (Dark and Pretty)” showcases the other side of Butler’s work. This gothic country number speaks in terms that are dark and dire. You can almost hear a fire crackling in the background. It’s not that sound of a campfire with buddies and beers, rather, it’s the remnants of a part of your life, smoldering before your eyes.

Lucky Thumbs is out on April 17th on Gypsy Eye.