"Fractured Skies" by Parts and Labor 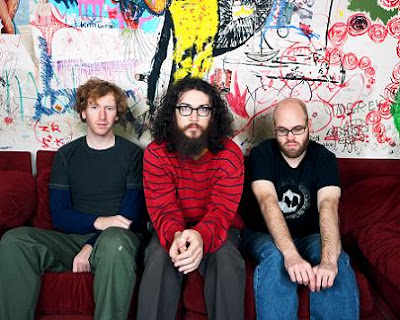 Now that we’re in the 21st century, I love watching all those old Sci-Fi movies where their future is our present. Cities were filled with jet packs, sky cars, and robots. Everyone dressed in way cool silver jumpsuits. Man, the 21st century looked so rad. Sadly, the reality is that culture and technology move a lot slower than Hollywood would lead you to believe. Sure there’s been plenty of technological advances, but look outside and the landscape looks a lot like it did when I was a child in the Eighties. Screw broadband, I want a goddamn jetpack.

I don’t know what I expected music to sound like in the 21st century, but I’m pretty sure that I haven’t been hearing it. By most accounts, the output of the current decade has been a bit of a downer. We’re stuck in a collective rut where bands keep putting a subtle spin on the same bunch of hipster approved influences. The difference between a 6 and a 10 on Pitchfork is less of a measure of artistry, and more of a measure of weaving the right influences into your artistry. Blues rock will get you sixes. Krautrock gets you nines.

It wasn’t until a month ago that I really felt like I heard something of the 21st Century. I got an advance of the new Parts and Labor disc, Mapmaker, and my immediate thought was that this is the sound of punk in the new millenium. Christopher R. Weingarten pounds the drums like a maniacal machine. A wild menagerie of guitars and electronics fight for your attention. Individually, these sounds are dissonant and fractured. Yet, when these elements are combined with BJ Warshaw’s transmitted vocals, a wonderful sense of melody arises. There’s real tension and movement, and the choruses soar. Finally, we have the music of the future.

Mapmaker is out on May 22nd on Jagjaguwar. Parts and Labor will be at The Beachland Tavern on June 30th with Proletarian Art Threat and Self Destruct Button.