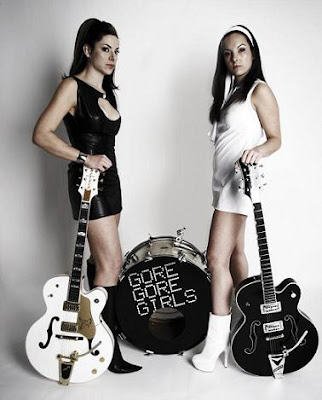 Jenny Owen Youngs has something like 31,000 friends on Myspace. That makes her roughly 1,500 more popular than yours truly. After listening to “F*ck Was I” quite a few times, she can add one more fan to her list. Yes, I’m a sucker for crass young ladies who drop f bombs. And before you accuse me of being another critic who’s a sucker for attractive women who drop f bombs in their songs, I would still be a fan if it was titled something more Battlestar friendly like, “Frack Was I.” Who the frack am I kidding? If she sang “Frack Was I,” I would be sending her love letters every night.

MP3:Jenny Owen Youngs – F*ck Was I

If you’re a music dweeb like me and a band bio lists Phil Spector, The Pixies, Patti Smith, Dusty Springfield, Television, and The Smiths in one write up, you’re either drooling or claiming foul play on the pr folks for toying with your emotions again. It’s cool. Go ahead and drool. “Cherries In The Snow” by Elk City delivers on that promise.

MP3:Elk City – Cherries In The Snow

I’m hoping some of you made it out to The Lime Spider in Akron last night to catch the Gore Gore Girls. Their next album, Get The Gore, is due out this June on Bloodshot, home to that other Detroit rock and roll machine, The Detroit Cobras. Like their neighbors and labelmates, the music of the Gore Gore Girls draws heavily from garage rock and sixties girl group sounds. It’s highly recommended for fans of three out of the four following things: hip-shaking, guitars, sing-a-longs, and leather.

MP3:Gore Gore Girls – All Grown Up

The rock gods can be rather cruel. Holly Golightly has fourteen albums and a load of singles in her discography, yet she may be best known for her one collaboration with The White Stripes on “Well It’s True That We Love One Another” from Elephant. “Black Heart” comes from her latest release, You Can’t Buy A Gun When You’re Crying. It probably isn’t a good idea to buy a fire arm with tears in your eyes and black in your heart. Here’s a better idea: give this pained, country ballad a few spins.