Upon First Listen: Your Favourite Worst Nightmare by Arctic Monkeys 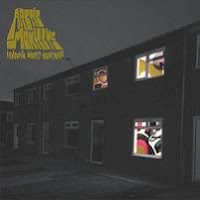 Love ’em, hate ’em, pretend that they’re dead, Arctic Monkeys are back with their follow up to 06’s Whatever People Say I Am, That’s What I’m Not. I didn’t have an advance of Favorite Worst Nightmare, I didn’t find my own copy in the back alleys of the internet. This is my first spin of the new disc accompanied by my initial thoughts of it on a track by track basis.

1. Brianstorm: It’s not a Brainstorm. I was shocked when I read the ep cover and learned it was Brianstorm. I had been mis-reading the title for weeks. Nevertheless, I still dig the full power guitar attack of Brianstorm. This is the proper way to open a second album.

3. D Is For Dangerous: This is cool and all, but I’m dying for a big melody. Something along the lines of “A Certain Romance” from Whatever…

4. Balaclava – Again my mind is playing tricks on me. This track is not “Baklava.” The Monkeys are still working that dark vibe. I’m still waiting for a top jam…Ok, I’ll forgive the absence of a memorable melody. The breakdown at 1:45 is maddening — in a good way.

5. Fluorescent Adolescent: A big shift in tone. Here’s the first track on Favourite Worst Nightmare that fits the Post-Libertines Brit Guitar Rock tag. It’s also the catchiest one I’ve heard so far… Now some slang, and a cutting line in the chorus, “All the boys you’ve slagged. The best you ever had. Is all just a memory.” Note to the Yanks in the house. Change the ‘l’ in slagged to an ‘h.’

6. Only Ones Who Know: We’re really slowing things down now with some balladry and echo, reverb, and regrets. Let’s not look at the word “ballad” as a bad thing here. “Only Ones Who Know” is actually a solid track.

7. Do Me A Favor: And we’re back. Not quite rocking like tracks 1-4, but we’ve got a nice surf rock vibe going on with this one. I should note that this isn’t a surf party, it’s a little too ominous for that…Wait, what’s that I hear? It’s not Jaws, it’s loud guitars at the 2:40 mark. Another quality cut.

8. This House Is A Circus: Just as I’m about to write that this one does nothing for me, it picks up midway through. Again, we’re back with something more sinister than what you’d expect from these lads.

9. If You Were There, Beware: We’re at that point again, where I want more melody…This Rob Zombie horror flick opening is spooky cool…I think at this point, I should change my expectations and just go with the Nightmare theme and enjoy the ride…See, now when the guitars get really big and vicious, I’m not pining for a sing-a-long, instead, I’m finding the volume button on my remote control.

10. The Bad Thing: It’s as if I can influence Fav Nightmare as it’s being played. Whenever I say bring on the melody, the boys break out of the gloom, and bring something lighter and bouncier.,..An alternate theory is that the people responsible for engineering, sequencing, and publishing Fav Nightmare, know how to properly balance an album.

11. Old Yellow Bricks: Much of the heft added to their sound has to be credited to the new bass player, Nick O’Malley. The back end has been packing quite a punch on this disc.

12. 505: Dream-like. Not the nightmare of the title. Well maybe not dream-like, more like slipping off into some much needed sleep after stress and exhaustion.

Final thoughts: This isn’t the soundtrack for drunkenness, tom-foolery, and youthful shenanigans like Whatever People Say I Am, That’s What I’m Not, and I’m cool with that. Favourite Worst Nightmare is heavier, more mature, more dangerous, and quite fine on its own.