“In The City” and “Sliding Doors” by Peel 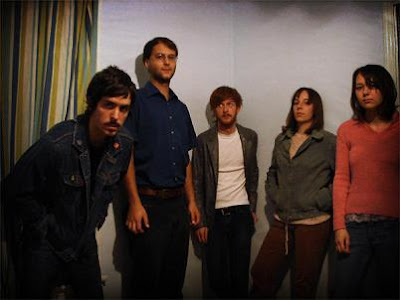 At first I couldn’t tell if this re-emergence of lo-fi and slacker rock was real, or if it was only a re-emergence in terms of my own listening experience. In the fractured scenes of the 21st Century, it only takes a few like minded souls and a broadband connection to feel part of a movement. Yet, as more and more slacker bands make their way into my soundsystem, it’s becoming harder to ignore.

Peel came my way through a very misleading email introduction. When I read the line, “Peel are influenced by Brian Eno and Blondie,” I said, “Hmm…that’s nice. Next.” A few weeks later, I hear Peel on KEXP and they’re sound is all about the classic lo-fi and slacker sounds. It’s like taking big bong hits with Lou Barlow at a weed party in 1993, and all those memorable pop tunes built with lots of feedback, fuzzy static, and keyboards gone wild filtered through a busted up boombox. Now, we’ve got something.