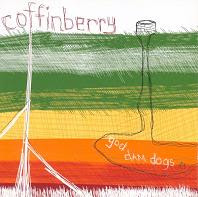 God Dam Dogs, Coffinberry’s latest long player, still has a good deal of that New York city cool that oozed from 2005’s From Now On Now and earned them comparisons to The Strokes and The Walkmen. This time around, however, that vibe from their earlier work is mixed with Seattle sonic sludge to create a fuller, heavier sound. Its dirty, gritty, fuzz fueled melodies are nearly (dare I say) grungy. I’m reluctant to use the G word (grunge) as it’s gotten such a bad rap from the third generation grunge bands still alive on the airwaves. Yet, as 2007 will see a reunion album from Dinosaur Jr, a band who was lumped into that movement, maybe it’s time to release the G word from its Rock ‘N’ Roll prison cell. Really, how am I going to convey the sound of the skinny tie rockers of the modern age meeting with the flannels and docs of Nineties, if I don’t toss in the word “grunge.” And why should NME and its “New Rave” writers have all the fun. I’d can use grunge in combination with garage to create a whole new genre. I’d call it grungerage, or maybe, garunge — something catchy to perfectly capture the sound of Coffinberry.

All joking aside (and I was joking about calling Coffinberry a garunge band), these Cleveland boys have gone out and made one of the finest guitar rock albums to come out of Northeast, Ohio in some time — right up there with Rubber Factory by The Black Keys and Easy Listening by Cobra Verde. From the first notes of “Packrat/Survivalist” this new fuller, more mature sound of Coffinberry is quite evident. On past efforts, guitarist/vocalist Nicholas Cross and guitarist Tony Janicek, supplied slinky fashionable riffs, now in their place are thick, roaring buzzsaws. The rhythm section remains propulsive with drummer Anthony Cross and bassist Patrick O’Connor ensuring that they get in and efficiently rock out of each number. “Earthworms in The Sun” finds the band toying with a wild campfire vibe, before plugging in and laying down some thick, meaty guitars. The straight up rocker, “Freeway Ends” flows freely into the delicately damaged piano and guitar ballad, “Aims Retreat,” where Cross’ vocals, battered and scratched, become the perfect compliment. Later, Coffinberry even dabble in Brazilian bossa nova, with the intro to “Clcoktower Blues.”

The maturing musicianship and songwriting is a big part of God Dam Dogs, but an equal, or even bigger part of this album, is their continued ability to lay down swift 2 and 3 minute rockers. The static charged, reverb heavy numbers like “The Ram” and “Bombs and Palm Trees” would have made Coffinberry pin-ups of the Lollapalooza generation 10 years ago. While tracks on the back end of the album, “Sonogram,” “Welcome To Hell,” and “Little Child of Dementia” recall the sloppy pop genius of producer Todd Tobias’ work with Robert Pollard and Guided by Voices.

I can toss around labels like garage, grunge, lo-fi, and even the mock genre garunge, but none of those terms are a comfortable fit for this band. God Dam Dogs finds them making their own sound, and it just happens to be god dam great.

Coffinberry’s God Dam Dogs is God Dam Great — 9 out of 10 on The Rockometer.