Warning: "continue" targeting switch is equivalent to "break". Did you mean to use "continue 2"? in /nfs/c06/h01/mnt/88637/domains/blog.irockcleveland.com/html/wp-includes/pomo/plural-forms.php on line 210
 I Rock Cleveland I Rock Cleveland | Baby 81 by Black Rebel Motorcycle Club 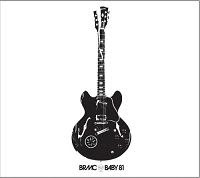 If you answered my rhetorical question by saying, “Develop their own sound,” give yourself a pat on the back. By taking the middle road between swamp-boogie and shoegaze on Baby 81, Black Rebel Motorcycle Club, may finally distance themselves from those nagging comparisons that have dogged them for the better part of their career. Songs like the lead number on Baby 81, “Took Out A Loan” as well as the first single, “Weapon of Choice” find that sweet spot by working a blues heavy guitar riff into a droning, repetitive rhythm. While the best example of this synthesis of sounds may be the driving, and decidedly poppy, “It’s Not What You Wanted,” where the electric squeals are layered on top of an up-tempo campfire jam.

Admittedly, many of these songs work much better on a primal level than they do on a critical level. You’re better off taking in the heavy riffs of “Berlin” than you are reading the lyrics to the chorus “Suicide’s easy/Whatever happened to the revolution.” Similarly, while it’s easy to get lost in the grooves on “Weapons of Choice,” the anti-war sentiments are vague, (“What’s your weapon of choice /There is no weapon to free us all /I won’t waste it, I won’t waste it, I won’t waste my love on a nation”) rather than pointed. It’s a fair criticism, but at the same time, I’ve never listened to BRMC to get insight into the workings of the world. I don’t know what “American X” is trying to say during the nine minute drone, and quite honestly, I haven’t bothered to find out. The boys found a good, heavy riff, accompanied it with some tasty reverb and echo, and I’m more than content to ride it out.

Baby 81 by Black Rebel Motorcycle Club: 8 out of 10 on The Rockometer.