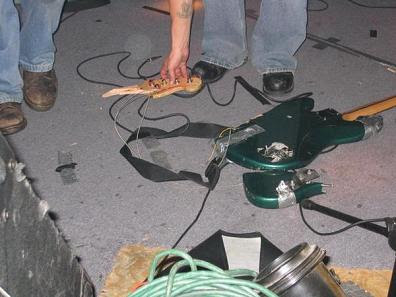 This is a big day at I Rock Cleveland. Today I’m handing out the first 10 in the storied (one year) history of The Rockometer. To those of you familiar with the site, it shouldn’t surprise you that Two Cow Garage, a three piece bar rock outfit out of Columbus, Ohio who recall The Replacements at their rowdiest and Jeff Tweedy at his most defeated, are receiving this honor and not some yodeling nymph with a harp. While it isn’t necessary for an artist to rock in the traditional sense to send The Rockometer to 10, as Two Cow Garage show, it sure as hell don’t hurt.

Last night it hit me. I was lying in bed, with Two Cow Garage on the stereo, and I realized that people just don’t write songs this damn good anymore. They pop when you want them to pop. The guitars drop, drums kick, and organs pipe in at exactly the right moments. They’re intelligent, powerful and refreshingly thesaurus free. They can kick you in the gut with their sheer force of their guitars, then they’ll spin a tale that’ll make a man cry.

III kicks off with the one-two combination of the romping/stomping “Come Back To Shelby” and the rockin’ howler “Epitaph,” two songs made for the open road and blowing smoke out the car window, before encountering the first of many highlights. “No Shame” hits on one of the dominant themes of III — working hard and not quite being good enough to succeed. Looking over his room with scattered notebooks, guitars against the wall, and amplifier tv stand, guitarist Micah Schnabel comes to the conclusion that “There ain’t no shame in just giving up and walking away.” As a listener, it’s not what you want to hear. You want your musicians to be bigger than life. You want them to be above the problems that curse you in your life. Their heat doesn’t go off, and they don’t stay awake thinking that there’s gotta be a better way.

Yet, this is a pattern that continues throughout the album. When Two Cow Garage reach their lowest point, as they do on “No Shame,” they don’t turn to a doctor, or drugs, instead they give in to the music, where turning the volume knob to 10 reveals itself to be the best therapy. It’s the sludgy sing-along of “The Great Gravitron Massacre” and the blistering bar rock of “Now I Know” that makes the pain manageable. Doubts abound in “Should’ve California.” Giving up is an option in “Mediocre.” And when living life couldn’t get much lower, the power chords of “Camo Jacket” are a savior.

Some of the best songwriting is to be found on the latter half of III. “Camaro” alternates between tender and explosive. He got the girl out of the parents’ house, the keys to the camaro, “Won’t Get Fooled Again” is on the stereo, but when the chorus hits a screaming “Not Tonight,” you’re left to wonder if he got the girl. While “Arson” perfectly captures the daredevil antics of youth where setting sh*t on fire, leads to gasoline and gunpowder, invincibility, and barely enough time to get away from the flames. Like “Camaro,” the ending is ambiguous — there’s a “30 second fuse and a bet you can’t afford to lose,” a flurry of drum explosions, then silence.

Jeff Tweedy popularized this no-depression sound of rock and country, and there’s going to be a lot written in the coming weeks when Wilco’s Sky Blue Sky comes out, but not even Wilco can match the power, or the conviction, of Two Cow Garage on III.