"I’ve Still Got You (Ice Cream)" by Pissed Jeans 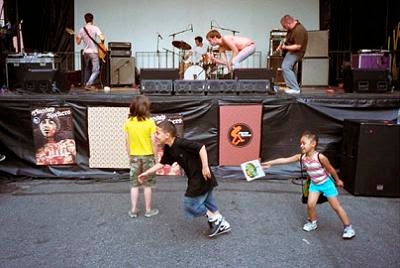 I’m not sure if this is a hunch or a prayer, but I would like to think that noise, scuzz, and fuzz is making a comeback. Ok, let’s be realistic. It’s a prayer, but, man, it sure would be nice if bands like Pissed Jeans, Pterodactyl, Clockcleaner, or someone more accessible like say, Times New Viking (Ha! TNV accessible) led a new movement to bring the rock back into indie rock. We’re in need of something, anything, to balance out the the hordes of twee inspired indie pop, hyper literate folk pop, and insanely dramatic indie rock bands out there today. It’s not that I’ve got anything against the current crop of indie popsters, and I’d be a liar if I said I didn’t listen to any of it (or enjoy some of it for that matter), but it’s a feeling I have that there’s a real opportunity for a different sound to emerge. As for a replacement? I’m not picky. I’ll take lo-fi, noise, or sludge.

In his track review for “I’ve Still Got You (Ice Cream)” on Paper Thin Walls, Andy Beta, name dropped Black Flag and Jesus Lizard. Or, in other words, this isn’t sunshine, lollipops, and walks in the park on a sunny spring day. Sure, it’s got ice cream in the title, but it’s more like ice cream while you sit on the curb after taking a swift shovel to the back of the head — it’s sweet and it hurts.

Pissed Jeans’ Hope For Men will be out on Sub Pop this summer.