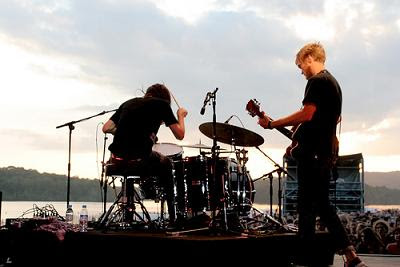 I’ve always had an affinity for songs about The Road. I’ve been on roads. Ask anyone who knows me, I’ll drive eight, ten, twelve hours to avoid taking a flight. Yet, my day long trips through the flatlands of the Midwest or across New York or Pennsylvania to the major cities of the East Coast aren’t anything like being on The Road for days on end, trekking to cities to play gigs for 10 or 200 people. Still, there’s that draw. Maybe it’s the sense of loneliness and isolation that comes from spending too much time with your own thoughts. Or, maybe, it’s that sense of helplessness you get in the middle of Pennsylvania when you realize, yes, it’s that damn big.

The Two Gallants ode to The Road, “Seems Like Home To Me,” is the lead number from The Scenery of Farewell, an e.p. being billed as their acoustic record. It really shouldn’t be a surprise to anyone who’s followed their career that they would release a stripped down set. They’ve always had a strong influence of roots, blues, and Americana providing the basis for their sound. Now, as they show a little more restraint, peeling back the static to let the guitar and violin have some room to breathe, those influences are even more pronounced, making that pain from being on the road to long sting just a bit more.

The Scenery of Farewell by Two Gallants will be out this summer on Saddle Creek. This will be followed by a full length tentatively scheduled for September. Also of note, Two Gallants will be on tour this spring and summer in support of Les Claypool with a date in Cleveland on May 29th at The House of Blues.