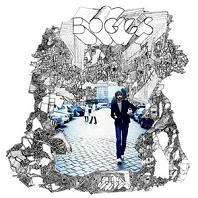 In Jason Friedman’s bio on Gigantic for Boggs, its stated in the winter of 2000 he came to the realization that all folk music is punk or all punk music is folk, or it’s all rock and roll. It’s a good quote to keep in mind when considering his latest release as Boggs. Just don’t think of it as Peter, Paul, Mary, three chords, and a cloud of dust, rather it’s later period Clash like London Calling, Sandinista!, or Combat Rock, and folk in the broadest sense of the word — one that encompasses the native music of Africa and The Americas, making the end result something like Paul Simon recording Graceland with the help of both Ladysmith Black Mambazo and The Clash. The songs are percussive, lush, layered, multi-dimensional affairs with even the most agitated numbers (“So I So You” and “Melanie In White”) showing an amazing degree of depth. You could shout and stomp to the choruses, but then you might miss something like the subtle addition of horns used to make a reverb effect on the guitars. Conversely, if you pay too much attention murky, undercurrent of the swamp boogie stomp of “Arm in Arm,” or focus too much attention to the added touches on the raucous, shout out “Backend,” you run the risk of missing their sheer power. Forts is that kind of rare album: one that rewards both the headphones as well as the big soundsystem, with each experience being highly rewarding and notably distinct from the other. 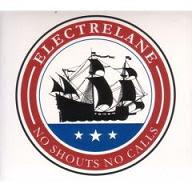 Electrelane
No Shouts No Calls
Too Pure
2007

One of my favorite moments on the version of “Capital Radio One” from The Story of The Clash, is when Joe Strummer is being interviewed on a train, and he’s talking about his musical epiphany, “When I saw the Pistols, right, I realized I wasn’t alone in the fact I couldn’t play too well…and when I saw the pistols that’s what struck me as great. It suddenly struck me, that it didn’t have to matter that much.” And for one song, it doesn’t matter. Everything comes together perfectly on “To The East:” a simple bassline, some tick-tick thump from the drums, a sparse, repetitive melody from the guitar, then add a little background noise from the organ, and a loving lament. It builds slowly, and graciously, and when the pain gets nearly unbearable, they hit the effects pedals and wham. We’ve got one of the best numbers I’ve heard in quite some time. Then again, maybe it does matter that Electralene have a limited amount of tricks, or maybe it’s due to the near perfection they reached on “To The East,” either way, nothing really grabs my attention until the latter half of the album with “Saturday” and the two groove heavy, instrumental tracks, “Between The Wolf and The Dog” and “Five” on either side. “Between The Wolf and The Dog” benefits from an aqua-net infused, hair metal riff, while “Saturday” utilizes the same careful construction that made “To The East” such a powerful track.

To The East by Electrelane: 6 out of 10 on The Rockometer. 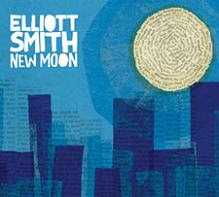 How do you like your Elliott Smith? If you think he peaked with Either/Or, then you will most likely be thrilled with this two disc set of material recorded between 1993 and 1997. Now, if you preferred the slick Beatles styled pop that appeared on x/o and to a greater degree on Figure 8, then, well, you’re best bet is to hold out hope that Elliott Smith becomes as prolific in death as Biggie or Tupac. Personally, I rarely listen to x/o and Figure 8, and due to the circumstances of his death, I had the hardest time listening to his first posthumous release, From A Basement on a Hill. It was way too heavy for me, during a period when I had enough heavy sh*t of my own.

Most of the songs on New Moon, consist of a quiet, confessional Smith, sharing his soul with his acoustic guitar. To his credit as a songwriter and an artist, the majority of these songs do not feel like toss-aways. That’s not saying anything on New Moon, approaches the greatness of many of my favorite songs from that era, like “Miss Misery”,”Angeles,” “Needle In The Hay”,”St. Ides Heaven,” “Between The Bars,” or “Rose Parade.” Also, you shouldn’t necessarily approach this release as a proper album. It doesn’t have the flow, or the cohesion of a studio release. It is what it is: a collection of unreleased material. Yet, in spite of all the caveats I’ve presented before you, at least half of these numbers are good enough to have appeared on Elliott Smith, Either/Or, or The Good Will Hunting Soundtrack. “Riot Coming” and “Whatever (Folk Song in C),” with its doubting chorus “What are you doing hanging around with me?” sound tailor made for the character of Will Hunting. “First Timer” and “See You Later” are the type of delicately damaged ballads that first bought Elliott Smith a permanent home in my record collection. While, the early version of “Miss Misery” is notable as it lends insight to Smith’s writing process. On New Moon, it’s only Elliott Smith and his guitar without the added instrumentation and production, and in place of the painful, memorable chorus, “Do you miss me Miss Misery like you say you do,” there’s still a glimmer of hope in Smith’s voice when he sings, “It’s all right cause some enchanted night I’ll be with you.” 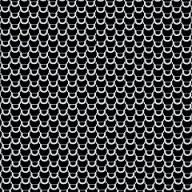 For Dungen it’s all about the freak out — not getting ur freak on, or Chic’s Le Freak freak out, we’re talking about the good old fashioned, drug addled freak out from the early days of psychedelic rock. Go ahead, skip tracks one through five, and head straight for the third minute of “Mon Amour” where Dungen lose all their inhibitions and freak the f*ck out. The drummer doesn’t want the guitarist to keep up with his beat, and the guitarist tries his best for a while, then decides he’d rather spend some time laying down riffs that would slay the monsters of rock, and that cat playing organs, he could care less what the drummer and the guitarist are doing, the time sounds about right to do some of those whirling and swirling sounds. Sure, a lot of those comparisons to The Beatles, The Kinks, or The Zombies, are still valid, but those allusions to classic rock are merely used as an excuse to get to the freak out. The smooth jazz, French pop of “Sa Blev Det Bestamt” lasts for one minute, then Dungen freak the f*ck out. The first song is an intro (named “Intro”) and do you care to guess what happens during the intro? Dungen freak the f*ck out. Dungen are a Swedish band and their songs are in their native tongue. I don’t have a Swedish-English translator handy, but I’m willing to be that the title “Gor Det Nu” has something to due with a freak out. Granted not every number freaks out. “C Visar Vigan” takes a more ambient, Middle Eastern take on their sound, and “Du Ska Inte Tro Att Det Ordnar Sig” does not end in a freak out, but dissipates rather harmlessly. I’d call that one a freak out fake out. I’m convinced the only reason that they didn’t freak out on every number, is that the human mind wouldn’t be able to handle so much freaking out on one album. And you thought Dungen only cared about freaking the f*ck out, no, they also care for your well being as a rocker. 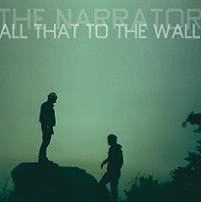 The Narrarator are one of those bands tailor made for RIYLs. I know, I know, the old Recommended If You Like, is such a lazy way to describe a band, but hear me out on this one. Do you like Modest Mouse? Yep. How about Built To Spill? Yep. Pavement? Are you kidding me, dude, I was listening to Crooked Rain, Crooked Rain yesterday afternoon when the boss caught me nodding off at work. Now was that so bad? The Narrarator hit all the right notes in their influences, then add their own slanted sense of humor, an off kilter sense of melody, and exactly the right amount of amplified blasts from the speakers, for All That To The Wall to stake its own claim to that lazy, clanging, banging slacker rock sound. Whether it’s the impatient and agressive sounds of “August 32nd,” the wild, flailing chorus of “Surf Jew,” the bandaged and bruised bravado in “Papal Airways”, or the off the rocker pop of “Panic at the Puppy Beach,” if you answered “Yep, yep, and yep” you’ll find plenty here to soundtrack your days of doing nothing.

All That To The Wall: 7 out of 10 on The Rockometer