Mapmaker by Parts and Labor 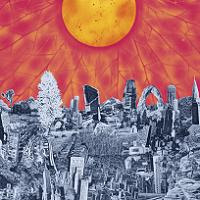 Imagine Rick Rubin and R2D2 together in a recording studio. Rick Rubin has his sights set on cranking out another monster rock album. Meanwhile, R2D2, sits next to him and says, “Awrooooooo.” Rick Rubin, tells the band in the studio to shoot for a bigger chorus. R2 says, “Awroooooooo. Whirrrrrrrrrrrrrr.” A visably frustrated Rick Runbin relents, “Ok R2, we’ll see what it will sound like if we let your friends sing back up.” Rick Rubin is pleasantly surprised by the collision of sounds — punk rock that wouldn’t sound out of place in ’87, ’97, or ’07, mixed with the relentless beeps, clicks, whips, and whirs of a robot chorus, creating a sound that seems years ahead of its time.

The band, their unlikely pair of producers, and their small army of droids are making great progress on the new record, when R2D2 has another idea, “Awroooooooo. Oooooooooh.” “No, R2, the drummer can’t drum with four arms. He only has two arms.” R2D2 unfazed by Rubin’s reluctance, offers more advice, “Awrooooooo.” “Ok, Ok,” Rubin resigns himself to losing another argument with the robot, “We can fit the drummer with two robotic arms so he can drum like he has four arms.”

Rick Rubin and R2D2 did not produce Parts and Labor’s latest cd, Mapmaker. It was recorded in Brooklyn by The Brothers, mastered by Alan Douches, with additional work done by Dan Friel and BJ Warshaw of Parts and Labor. I know, I know. You really liked the idea of a Rubin and R2 collab, so did I. That’s why I invented the story of the odd couple and their army of robots. Truth be told, there are no robots whatsoever listed in the credits for Mapmaker. They don’t sing backup (Friel and Warshaw handle all the electronics), and although he may lay down manic beats that imply the usage of a third or fourth arm, Parts and Labor’s drummer, Christopher Weingarten, does not incorporate extra appendages (robotic or otherwise) into his drumming.

Whether you stuck with my story, or turned it off after the first “Awrooooo,” it did serve a real purpose — I could think of no other way to explain the convergence of our past, present, and future in one Rock ‘N’ Roll album. The rhythms and synths are mad, frantic visions of what could be our future — paranoia, disorientation, and fear — then a big rousing chorus hits, and you’re reminded that just maybe, there’s hope out there — hope for the next big rock record. There’s hope for some mad noise addicts from Brooklyn to make a piece of art that will resonate with the populace. Most importantly, there’s hope for a generation that lives in the fear-mongering 24 hour news cycle, that when they see a peak of light through the fractured skies, there will be better days ahead.

Mapmaker by Parts and Labor is an otherworldly 9 1/2 out of 10 on The Rockometer.