Can’t Get You Outta My Head 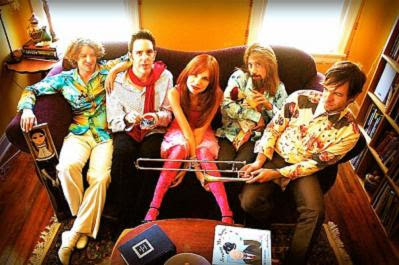 “Drug Store Bust” by Future Clouds and Radar (pictured above) was previously featured in my last episode of Michael Stanley Made Me Do It, but seeing as though I haven’t been able to get this one outta my head the past couple days, it’s worth a second mention.

Future Clouds and Radar are an Austin based band fronted by Robert Harrison, a man best known for his work in Cotton Mather in the Nineties. FCR recently released their self titled, debut double disc. I haven’t listened to the whole album yet — my double disc-o-phobia is getting in the way again. It took years for me to get over my fear of the double live, so excuse me if I’m still a little slow to listen to a double studio effort. That being said, the more I listen to “Drug Store Bust” the more likely it is that I’ll have to confront my double disc fears again. It starts out a bit disorienting, like, well you just busted up a drug store and took lots of drugs, before it settles into more traditional guitar pop territory and delivers some serious hooks.

Believe me. I’m as surprised as you are that I have a new Wilco song wedged in my head. My thoughts on Sky Blue Sky can be summed up in one word, “ZZZZZZZZZZZZZZZZZZZ.” Yet, there I was Sunday night, watching the Cleveland Cavaliers on the tv, and there was this VW commercial being played during nearly every break. Maybe you’ve seen it — the tow truck comes along to tow an illegally parked vw, but after sitting in the car for a moment, the dude becomes smitten with the stylish and sophisticated volkswagen, and instead of towing the car, he moves it up a few feet to a legal spot. The song featured in the spot was definitely by Jeff Tweedy or Wilco, but it was not nearly as snoozesome as Sky Blue Sky — this soulful song actually had some tempo, a strong sense of melody, and a chorus made for singing out of car windows. A couple more cuts like this and SBS would have fared much, much better.

After a little research, I found out that “The Thanks I Get” was recorded for Sky Blue Sky, but didn’t make the cut. It has since been released as a free download from Wilco, intended as a thank you for buying Sky Blue Sky. I guess that means if you didn’t buy the album, then you can’t click on the song link.

MP3:Wilco – The Thanks I Get