Where To Rock It

The Doctor Teeeth showcase their riff-tastic rockingness at The Cleveland Agora with Phaseur, Unicron, The Body Language, and This World Fair on Friday night.

The Parish Hall’s two day world music festival runs this Saturday and Sunday. The show starts at 4 on both days. A one day pass will set you back $15, while a two day pass can be had for $25. 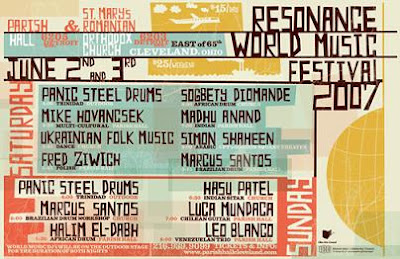 Saturday night at The Beachland Tavern, Califone are playing with The Bitter Tears and Kent’s Beaten Awake.

Coltrane Motion, headline noise night at Bela Dubby, on Saturday night with Hot Tapes, Clear Days Always, and E.E. CM have been making some waves on the internets of late with their latest release, Songs About Music. Their style is similar to another band I’ve been championing of late, Parts and Labor. They take basic pop song structures and fill those compositions with layers of beeps, squelches, and squeaks. It sounds a lot better than my descriptions.

One more show of note on Saturday night: Cleveland punks, The Vacancies are having their cd release party at The Jigsaw in Parma with Nick Wolff, J-Hell and the GT40s, A Different Devil.

Now, I’ve just gave you plenty of reasons to get your rock on Saturday night, but the big event is happening at the Quickie. The Cavs and Pistons are playing game six, and if Super Geraldo shows up to this game with his superman cape, there’s no way we lose. C-A-V-S. Cavs. Cavs. CAVS!

Normally, I’d be ecstatic about Awesome Color coming to Cleveland for a show. Except in the case of this coming Tuesday, when they take a break from their opening spot on the Dinosaur, Jr tour, to play Cleveland. So, instead of being ecstatic, I think I’ll adjust my excitement level down to stoked. Cleveland’s New Lou Reeds and National Suicide Day (feat. members of TMIBH, Lives of Saints, and Interfuse) handle the openers.