Warning: "continue" targeting switch is equivalent to "break". Did you mean to use "continue 2"? in /nfs/c06/h01/mnt/88637/domains/blog.irockcleveland.com/html/wp-includes/pomo/plural-forms.php on line 210
 I Rock Cleveland I Rock Cleveland | Double Dagger 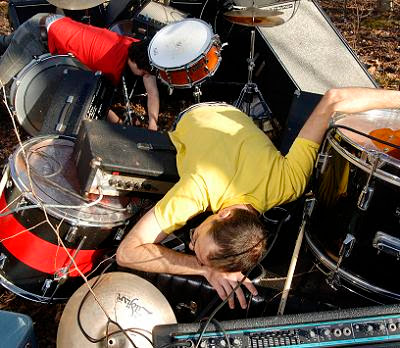 I’m finding it harder and harder to complain about the lack of “Rock” in indie rock these days. Parts and Labor dropped a massive album last month that redefined the sound of punk in modern times, and the art-punk duo No Age are getting great press from Pitchfork. Maybe, we’re finally breaking free from the dominance of sweet, non-offensive indie pop. Like their brethren in rock, No Age, Double Dagger are art-punk in the truest sense of the genre, they work day jobs as graphic designers. Another comparison sure to come up, is that of Cop Shoot Cop, the guitar less rock band from the late Eighties and early Nineties. Did I neglect to mention that Double Dagger don’t do guitar? Well, they don’t need the six string. They make plenty of lovely, rumbling and rousing noises without it.

Ragged Rubble by Double Dagger is out now on Stationary Heart Records. Double Dagger will be in Cleveland this Thursday at Tower 2012 with Yukon, Archaeopteryx, Clan of the Cave Bear and Self-Destruct Button.

Double Dagger was recently featured in the most excellent podcast, Michael Stanley Made Me Do It.