Warning: "continue" targeting switch is equivalent to "break". Did you mean to use "continue 2"? in /nfs/c06/h01/mnt/88637/domains/blog.irockcleveland.com/html/wp-includes/pomo/plural-forms.php on line 210
 I Rock Cleveland I Rock Cleveland | “99%” by The Mooney Suzuki 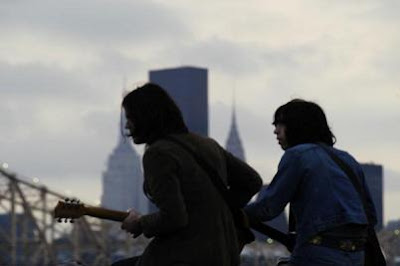 It seems like ages since I mentioned The Mooney Suzuki, so let’s sum up. I got my first advance of Have Mercy before the new year and was rocking it pretty regularly through the winter. 2007 saw the collapse of V2 records, and Have Mercy was left in label limbo. In January, I previewed a couple tracks, not knowing if or when Have Mercy would ever see the light. It took some time, and a lot of ins, outs, and what have yous, but The Mooney Suzuki’s Have Mercy is finally on its way out. The worst part of this whole ordeal was that The Mooney’s managed to make the definitive musical statement of their career, and they had the damnedest time in getting it to the people.

If there is an upside to this excruciatingly long release process, Have Mercy really is a summer album. Their feel good mix of rock, soul, and garage really does sound better cruisin’ around with the windows down on a sunny day than it did when I was bundled in blankets bunkered down in my apartment.

Have Mercy is out now on iTunes with four bonus tracks. Its physical release is next Tuesday. The Mooney Suzuki will be on tour June and July in support of Have Mercy with a date at The Beachland Tavern on July 5th.