And Now For Something Completely Different: Bang Camaro and Their Dude Chorus 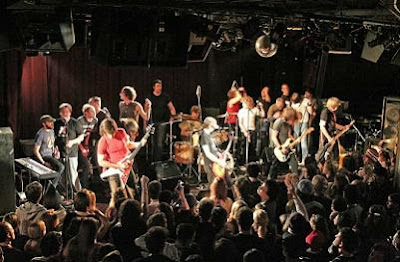 Where do I start with this one? I could start with retro rock or pop metal revivalists, but that doesn’t come close to telling the whole story. Bang Camaro has anywhere from 16 to 20 lead singers at any given time. You see, when you want to recreate those big metal sing-alongs of the Eighties without a bunch of trickery, you need a giant chorus of dudes. Those dude choruses are important part of their sound, as are guitar solos — lots and lots of guitar solos . After all, according to guitarist and co-founder Alex Necochea, that’s what the people wanted, “They (the fans) wanted to scream along with the huge choruses or they wanted to air guitar to the solos.” These guys may be on to something. “Living on a Prayer” and “Pour Some Sugar On Me” are great songs (only) when your surrounded by a bunch of drunk friends living the high life, shouting lines like,”Whoa…We’re half way there/Whoa, Oh living on a prayer,” performing rock kicks, and rocking the leg guitar in the middle of a bar.

Bang Camaro and their dude chorus will be at the Grog Shop on July 3rd.