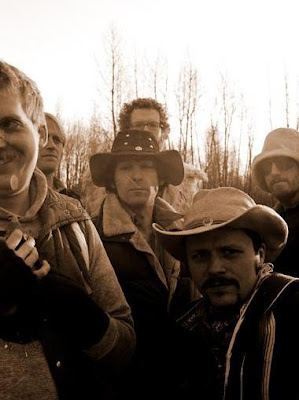 Neither the “Wild Mountain Nation” single, nor any of the pre-release b-sides prepared me for Blitzen Tapper’s Wild Mountain Nation. I thought I knew what I was getting into, but in reality I was like a child, walking into the middle of a movie. I had no clue. In “Wild Mountain Nation,” I heard the best Dead song not recorded by The Dead. The b-sides, “Boss King” and “Cool Love #1” showed hints of modern influences like Beck and Pavement, while another outtake, “Jesus On The Mainline” was a quick two-minute stomp through American roots music. My wake up call came during the lead number, “Devil’s A Go-Go.” I swore the disc was skipping, but I wasn’t listening to a disc, I had my zune jacked into the stereo. I even went back to eMusic to make sure there weren’t any complaints about skips. Nope. The second time through, I realized “Devil’s A Go-Go wasn’t skipping, rather the guitars were so cut up that they aped a skipping disc. Now, this is f’n interesting.

While the early comparisons to The Dead, Pavement and Beck are still valid, repeated listens to Wild Mountain Nation revealed a band equal parts brilliant and bat sh*t crazy. It’s the yin-yang of Blitzen Trapper. For every thick, roots groove like “Wild Mountain Nation,” there’s a twisted, blues explosion like “Miss Spiritual Trip,” and for every bat sh*t crazy moment like “Devil’s A Go-Go” or “Woof & Warp of the Quiet Giant’s Hem” (a song whose sole vocals come in the form of “Ya’s“), there’s a Soggy Bottom Boys moment (“Wild Mtn. Jam”) to keep the disc in balance. It’s a type of peace I could have never imagined in my college days. The indie rockers hated The Dead, the hippies hated The Blues Explosion and Pavement, and most people hated all three bands. Yet, Blitzen Trapper, whether due to brilliance or madness, are able pull these divergent influences together into one captivating album.