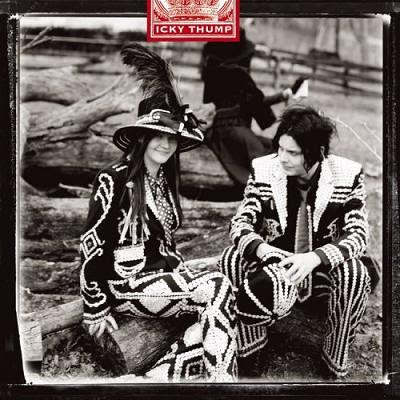 Finally, a review that everyone will agree with. Answer these 10 simple questions concerning the White Stripes, then go to the end of the quiz and add up the values to each question. You will have a score between 1 and 10 that will produce a 100% scientifically accurate score of Icky Thump based on your own musical preferences. Advanced students then can use these questions and the corresponding answers as the basis of their very own record review.

2. The White Sripes’ sound can best described as:

4. The White Stripes’ continued adherence to the two-person band structure of guitar (sometimes piano) and drums:

A. Is part of their appeal
B. Has painted them in a corner
C. Is itself an artistic statement
D. An embodiment of pure Rock ‘N’ Roll
E. Unnecessary

7. My favorite songs by the White Stripes have always been:

A. The big, blistering radio-ready singles like “Blue Orchid,” “Seven Nation Army”, “The Hardest Button To Button” and “Fell In Love With A Girl.”
B. The playful numbers found at the end of their discs like “Well It’s True That We Love One Another” on Elephant and “Your Southern Can Is Mine” from De Stijl
C. The old bluesy jam monsters like “Death Letter” and “Ball and Biscuit”
D. The country, folk tunes like “We’re Going To Be Friends” and “Hotel Yorba” from White Blood Cells.
E. The interesting choice of covers like “Jolene,” by Dolly Parton and “I Just Don’t Know What To Do With Myself” by Burt Bacharach.
F. The songs on Get Behind Me Satan that sounded the least like White Stripes songs.

A. I can’t believe that people still take the White Stripes seriously.
B. Jack White may be the only rock star of our generation.
C. there’s nothing new that can be said by a rock band so steadfastly retro.
D. there are so many new and exciting bands that the White Stripes are increasingly irrelevant
E. continue to do more within their self subscribed parameters than bands with 3, 4, or 10 more members.

9. I find _______ to be the most useful tool in determining what albums are worth my hard earned dollar.

A. the opinions of The Village Voice
B. Pitchfork
C. Rolling Stone
D. mp3 blogs
E. my own opinions

A. Person Pitch by Panda Bear.
B. Neon Bible by Arcade Fire.
C. Sound of Silver by LCD Soundsystem.
D. Hissing Fauna, Are You The Destroyer? by Of Montreal.
E. You’ve gotta be sh*tting me. Those are my choices?

Rock and roll will never die. The exhilarating sounds of the White Stripes all but guarantee it’s survival for another generation. After the monumental let down that was Get Behind Me Satan, a rejuvenated Jack and Meg return to the formula that worked so well for them on earlier albums like De Stijl and White Blood Cells. While some may argue that the White Stripes continued adherence to being a guitar and drums duo has painted them in a creative corner, the truth is that Jack White’s wailing guitar and Meg White’s complimentary drumming, though simple and primal, is the pure embodiment of Rock ‘N’ Roll.

Jack White is at his best when he’s wielding the all mighty six string and laying down monster riffage. Lead single “Icky Thump” recalls the guitar grandeur of some of their earlier singles like “Seven Nation Army” or “Hardest Button to Button.” “You Don’t Know What Love Is (You Just Do What You’re Told)” is a second single waiting to happen. Other White Stripes’ trademarks are evident in the quirky Patti Page cover “Conquest” and the playful album closer “Effect and Cause.” If there’s something missing from Icky Thump, there isn’t a jam monster like “Death Letter” or a quaint folk number like “We’re Going To Be Friends.”

It’s 2007, and the White Stripes continue to do more with 2 people that other bands do with five, six, or twelve members. Trust yourself, and not the critics at The Village Voice, Icky Thump blows away all of those pretentious indie albums that the music intelligentsia love these days.