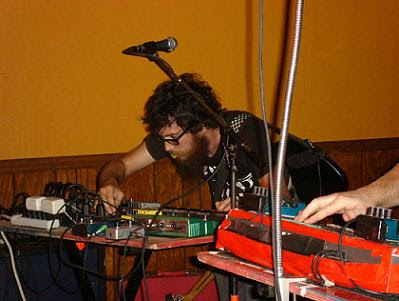 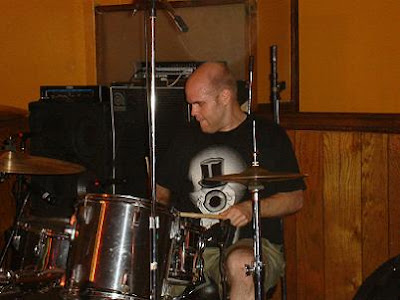 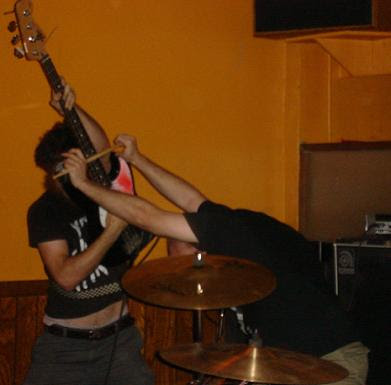 When BJ Warshaw from Brooklyn’s Parts and Labor, took the stage at the Beachland Tavern last night, he greeted the crowd by saying that this show marked their 10th appearance in Cleveland, and that they’ve always been grateful for the support that they’ve enjoyed in our city. Turns out, not every other city they play “gets” Parts and Labor. I was astonished. You mean other people don’t circle the date on their calendar the minute a Parts and Labor show is announced? And the crowd isn’t armed with video recorders and digital cameras fixated on their every move? If you saw the number of people capturing the show last night, you would swear that it was Sufjan Stevens on stage debuting songs about Minnesota, and not a scrappy band of noise-punks.

Traditionally, knob-tweaking and head banging don’t go hand in hand. You might expect some head-bobbing, or zoning out, but not full on banging. I’m not sure exactly how it works, but those boards filled with buttons, wires, boxes and power strips in the hands of mad scientists, Warshaw and Dan Friel, make huge anthems out of whirrs, buzzes, beeps, and squelches. An equally important part of the mix is drummer, Christopher R Weingarten, who is such a super human freak on the kit, you half expect his shoulders to dislodge or his eyeballs to fly out from their sockets at any second. The resulting noise all but requires head banging.

Parts and Labor began their set with the manic propulsion of “A Great Divide” from 2006’s Stay Afraid, then proceeded to tear through a number of cuts from their latest release, Mapmaker, including “New Crimes,” “Long Way Down,” Vision of Repair,” and “The Gold We’re Digging,” before reaching a peak with “Fractured Skies.” Weingarten tried to hide from the stage for some recovery time (and lord knows the dude needed to cool down for a bit), leading to a short where’s our drummer search. Once everyone was back in place, a three song encore followed that worked the band and the crowd into overdrive. By the time they were done for the night, my mind was so pummeled that the best I could muster was a “F’n incredible” to the dude standing next to me, and a “Most excellent, dude,” when I found Warshaw at the bar. My words may have been failing me, but there was no mistaking that I had just witnessed a massive performance.

Cleveland’s Proletarian Art Threat reunited last night for a cd release chronicling the bands output from the late Nineties and early part of this decade. Vocalist Stephe DK and drummer Jeff Ottenbacher are now in The New Lou Reeds, while Ed Sotelo now handles bass for The New Lou Reeds and Cobra Verde. Proletarian Art Threat sound nothing like those bands. They hearken back to the days of groove heavy, art damaged punk rock. If you needed proof of their quality, it was right there in the front row. All the dudes I see at every other classic punk reunion show like Radio Birdman or Mission of Burma, were pumping their fists in the air.

Let me say this about Self Destruct Button. They’re not for everyone. Let’s say you have an attention span. This band’s not for you. Let’s say you value things like structure. Again, they’re not for you. Now, if you like improvisational noise where minutes of dexterous noodling can either crash unexpectedly into melodic hardcore or sweep gently into grand post-rock, then you may have a new favorite band. At the end of their set, they took an unpredictable turn into Rush’s “Spirit of Radio.” I haven’t heard that tune in years, and Self Destruct Button absolutely nailed it.