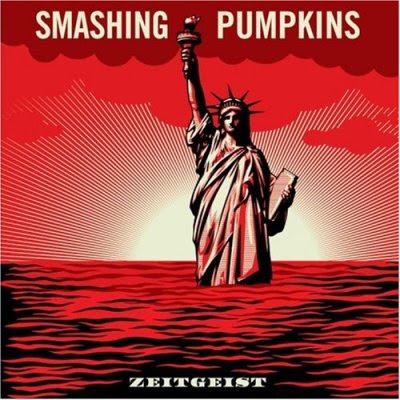 1. Doomsday Clock: The intro is HUGE. Chamberlain is pounding really f’n hard on those drums, and the opening guitar riff is layered, big and thick. In fact, some might say that it’s apocalyptic. If I was reviewing the first 30 seconds it would be a 10 on the Rockometer.

2. 7 Shades of Black: Things were going well until that awkward breakdown. When you hear it, you’ll know what I mean.

3. Bleeding the Orchid: Ok, there’s about 10 Billy Corgan’s singing backup during the chorus. This trick may have worked for Freddie Mercury, but it sounds kinda goofy with Billy’s voice. Next.

4. That’s the Way (My Love Is): This is the second mid-tempo number in a row after two rockers. The guitar sounds are straight out of the My Bloody Valentine school of rock, using Kevin Shields’ trademark wall of noise. It’s definitely not a new trick employed by Corgan & Co, but it’s still an effective trick.

5. Tarantula: I would like this tune a whole lot more if it didn’t have that regrettable opening line, “I don’t want to fight/Every single night.” I think all of us can find better opening lines in our own notebooks of tortured teenage poetry. Why not, “Every day is gray/ The pain won’t go away.” That would work pretty good for a Smashing Pumpkins song, right? Opening line aside, this is a solid first single.

6. Starz: Their programming might not be as good as HBO, Cinemax, or Showtime, but it’s a much better deal for your money, especially when you package it with Encore. “Starz,” as in the song by the New Pumpkins (not the movie channel) is kinda second rate, too. This is the least compelling number on the album so far. “Starz” should have been relegated to a b-side. Lord knows Billy and the band had plenty of material left over.

7. United States: Much better. Dark and marauding, I’m sure it has something to do with impending doom, or an apocolypse, too. Now, I’m at the guitar solo that sounds like whale songs. It goes on for a bit. The guitar onslaught returns, but what was that? Man, that yelp Billy just let loose sounds so processed, forced, and unreal. This one is hit or miss. It’s close to epic Pumpkins at their finest, but some of the production embellishments are too much. Just because you can record eight tracks of the same scream doesn’t mean you have to use multiple tracks, or that you should use all those tracks.

8. Neverlost: What’s that word in internet speak where it’s not good, and it’s not bad, and you don’t really have an opinion on something? Meh. I think that’s it.

9. Bring the Light: What you can’t see is that I’m going through email right now. For the first eight songs I was listening pretty attentively. I’m waiting for something to blow me away, and this isn’t it. Time to catch up with all the promo people who were kind enough to email and say hi, listen to my new record, today.

10. Come On (Let’s Go): This is the most direct number of Zeitgeist’s first ten tracks. I could definitely see this one finding it’s way onto rock radio playlists.

11. For God and Country: See Numbers 1 and 7. Do you think we’re going to get political again? Nope, it’s a b-side masquerading as an album track.

12. Pomp and Circumstances: Very Queen-y. First there’s the chorus effect with the vocals (and this time they may not be all Billy), and now a guitar solo just zipped by that sounds like it was by Brian May. A very fitting album closer.

The verdict: I’ll need a few more listens. It’s definitely not in the same league as Gish or Siamese Dream, but at the same time it’s a marked improvement over Zwan and Corgan solo.

Zeigeist is streaming now on Spinner and will be available nationwide on July 10th.