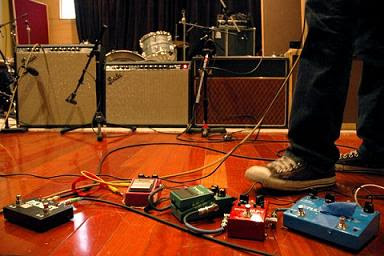 Film School’s self titled release on Beggar’s from 06 was one of my sleeper hits (pun kinda intended) from last year. Steeped in the atmospheric, shoegaze sounds of Britain in the nineties it’s lush, layered numbers were tailor made for late nights. On September 11th, Film School will be releasing their follow-up, Hideout. It features an almost entirely new lineup with Dave Dupuis on guitar, Lorelei Plotczyk on bass and James Smith on drums. The effect of the new lineup is instantly apparent on the first single from Hideout, “Lectric.” It still has that spacey, blissed out vibe with synthesizers stretching out in every conceivable direction, but the bass has a considerable amount of bite to it. It’s the difference between floating in space and space truckin’.