Warning: "continue" targeting switch is equivalent to "break". Did you mean to use "continue 2"? in /nfs/c06/h01/mnt/88637/domains/blog.irockcleveland.com/html/wp-includes/pomo/plural-forms.php on line 210
 I Rock Cleveland I Rock Cleveland | "Crimewave" by Health 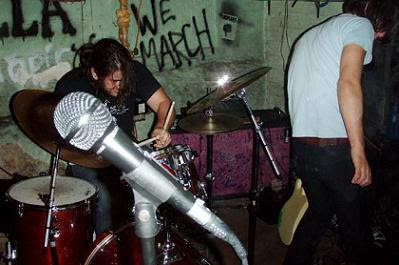 “Crimewave,” the latest single by Los Angeles noise punks, Health, is a bit of a misnomer. It’s not a full on crime wave as much as it is a smash and grab job. There’s a real sense of urgency built by hectic drumming, as well as the guitar’s unpredeictable screech and squlaor. There’s barely two lines of vocals and they’re largely inaudible. If I had to guess, I would say that they probably have something to do with tossing a cement block through a store front window, or sticking it to the man. Ultimately, those vocals are the least interesting part of the song. This one is all about packing as much noise as you can into a two minute song, much like Sonic Youth did years ago with “100%” and as their contemporaries, No Age did with their debut Weirdo Rippers. “Crimewave” peaks when the static assault builds to buzzsaw levels at the minute and a half mark, then abruptly scampers away to the pound of the bass drum. It’s over before you know it.