Warning: "continue" targeting switch is equivalent to "break". Did you mean to use "continue 2"? in /nfs/c06/h01/mnt/88637/domains/blog.irockcleveland.com/html/wp-includes/pomo/plural-forms.php on line 210
 I Rock Cleveland I Rock Cleveland | Where To Rock It (Super Hyphenated All Noise Edition)

Where To Rock It (Super Hyphenated All Noise Edition) 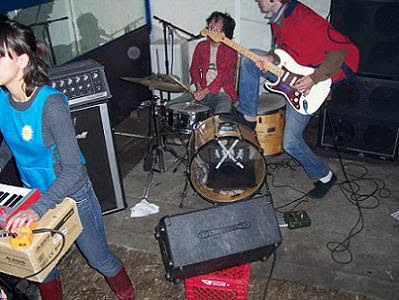 This is the special lo-fi, art-punk, noise-rock, post-rock spectacular edition of Where To Rock It. If you’re lucky enough to be in the city of Cleveland this week (and believe me, with this lineup, you are lucky), you’re going to be treated to some of the best noisy, arty, experimental jams in the scene today. It’s a week of shows that begs for a few extra pair of ear plugs, as well as liberal usage of your company’s sick time. Rock it.

My first experience with Times New Viking came last year when they opened for Mission of Burma at The Grog Shop. I remember thinking to myself, “Hmm…that opening band, Times New Viking, they were all right.” I also remember searching out their music on the Internet after that show, and upon hearing their ultra lo-fi aesthetic, thinking to myself, “Hmm…is this the same band?” Yes it is. TNV on disc and TNV live are two vastly different bands. It took me a while to learn to appreciate that store bought boom box fidelity, but once I did, they became one of the most exciting bands to emerge from Ohio in ages.

There are no noise shows on Saturday night. That doesn’t necessarily mean that this is a night off. I’m going to be at The Beachland Ballroom for the always excellent Detroit Cobras.

Sunday night, at Now That’s Class, you can catch the ambient/experimental sounds of Cleveland’s Colorforms, who showcase an entirely different side of the noise spectrum. While many of the bands I’m previewing can be a little rough and abrasive, Colorforms specialize in long, expansive sound explorations. Screen Vinyl Image open.

Deerhunter have been getting mega love from the press in 07, especially from these guys. They’re so smitten with this band that if the dudes take a dump, they’ll cover it as news. If you want to know what Deerhunter are about, and don’t want to know the scatastically disturbing details, the Cleveland Scene had a good write up this week.

Joining Deerhunter on Monday night at the Grog Shop, are The Ponys and Jay Reatard. While Deerhunter may be headliners, I’d recommend getting there early for Reatard’s set. I’ve recently just gotten into his 2006 release, Blood Visions, and it’s a brilliant mix of lo-fi punk and garage played through the mind of someone brilliantly demented.

From Chino, California, Abe Vigoda (not that Abe Vigoda), are a part of the same fertile noise rock and art punk scene that has already produced No Age and Health. There aren’t household names yet, and they’re just now beginning to register on the underground radar, but I’m confident that you’re going to be hearing some sweet noise out of these bands in the coming months and years. John Thill (of the soon to be classic “Girls of Meth“) and Eagle Ager open for Abe Vigoda at The Parish Hall on Tuesday night.

Here’s a great quote from Pteradactyl’s press page from the blog Good Weather For Airstrikes: “After waiting in line forever in the freezing cold on the ONE FUCKING NIGHT I forgot my scarf and gloves, we were finally admitted, only to have to wait through two interminable, nigh-unbearable noise rock sets from Hearts of Darkness and Pterodactyl, if you must know. I’ll admit that I’m not the biggest fan of noise rock, but the two opening bands seemed to subject the audience to nothing more than aural torture.” After reading that quote, and then the band’s response, “Hooray for aural torture,” I had to hear more.

Pterodactyl’s debut, the self titled disc some times known as “The Blue Jay Album” is one most adventurous guitar rock albums you’re likely to come across this year, and I’m willing to bet that this show on Wednesday night at the Beachland Tavern with Team Robespierre and Jerk, is going to be one ear-splitting good time. Or, it’ll make you deaf and swear off rock music for good. Either way, it’ll be interesting.

Post-rock, post-metal, or art-metal. Take your pick. To the hipsters Pelican are post-rock, and to the heshers they’re metal. Ultimately, what really matters is how Pelican infuse their instrumental rock with monster sized riffs.

Pelican, Priestbird, and Your Black Star will appear at The Grog Shop on Thursday, July 19th.