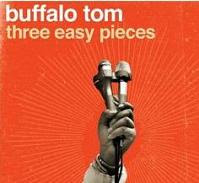 Buffalo Tom never seemed to get the same level of acclaim as their contemporaries who thrived in the same Massachusetts alt rock scene during the Eighties and Nineties. They didn’t have the buzz of the Pixies. Kurt Cobain never publicly spoke of his love for Buffalo Tom. Nor, did they have the charm, or good looks needed to grace glossy magazine covers like Evan Dando from The Lemonheads. They tried to match the guitar grandeur of Dinosaur, Jr on their debut album produced by axeman extraordinaire, J Mascis, but quickly abandoned that approach for a simpler rock sound. If Buffalo Tom had one edge on the other Mass rockers, it was their songs . They had a consistent string of singles on alt radio and MTV’s 120 Minutes that included “Taillights Fade,” “Soda Jerk,” “I’m Allowed,” “Tangerine,” and “Birdbrain.”

On Three Easy Pieces, Buffalo Tom’s first new release in nine years, their strength is the same as its always been: the songs. Like their earlier releases, guitarist Bill Janowicz and bassist Chris Colbourn, share the lead on a memorable mix of burners (“Three Easy Pieces”,”Renovating”,”and “September Shirt.”), mid-tempo rockers (“Bad Phone Call” and Gravity”), and ballads (“Lost Downtown” and “Thrown”), played with a little bit of alt rock fuzz and a little bit of Northeastern twang. I don’t know if this is ironic, or merely par for the course, but as Buffalo Tom has released a comeback album that’s as strong as any of their previous work, they’re likely to be overshadowed once again by one of their neighbors. Dinosaur Jr garnered quite a bit of attention for their triumphant return earlier in the year and will undoubtedly be singled out for staging the year’s best reunion. By no means should this lessen what Buffalo Tom have accomplished, rather, it should reaffirm the undeniable level of talent of the musicians who emerged from Massachusetts in the Eighties and Nineties who made great music in the past, and are still making relevant music today.