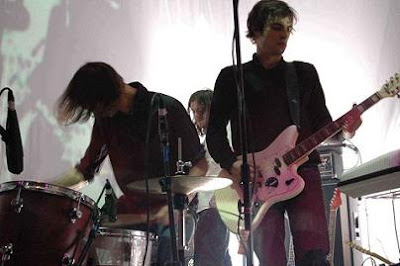 Don’t hate Turzi because they’re French. It certainly isn’t their fault that a certain band (I’m not naming names, Justice) likes to play in front of stacks of amps that do nothing. Just because one band from one country likes fake amplifiers doesn’t mean every band from that country does. Besides, when you hear Turzi, and their mix of minimalist kraut and penetrating drone, you get the impression that they’d be more comfortable playing late nights in a poorly lit, dank basement club filled with unsavories than under the big lights of the festival stage in front of thousands.

It’s not coincidence that both numbers featured today start with the letter “A.” On Turzi’s debut album, A, due out in the states September 4th on Kemado, every number starts with an “A.” This is particularly useful for all aspiring critics — you have your intro written for you: “Turzi are so audacious that they’ve named and graded their debut album, A. ” Then fill in some big words, drop some obscure German artists, and round it out by saying that A is or isn’t an A. Review done.