The Broken String by Bishop Allen 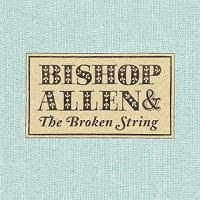 Bishop Allen were one of the original blog bands who went from obscurity to internet notoriety on the backs of the mp3 blog scene. Being a blog band isn’t always a good thing. First, to be a blog band often means that your sound is safe enough to appeal to every kid with a laptop and a blogger account. Secondly, blog bands almost immediately come with a ready made backlash. Endless hyperbolic posts of “OMG, I f’n love this song!” and “OMG, this is the best album I’ve heard this year!” leave a band with nowhere to go but down. One of the most notable accounts of blog band backlash came via Marc Hogan’s Cold War Kids review from 06 which was accompanied with the heading, “Bloggers raise your standards!”

If there’s another reason why blog bands are set up to inevitably fail, it’s due to the fact that the initial buzz is often built upon one great single (see Voxtrot) or one great ep (Cold War Kids) and the band is often thrust into a situation where they need to quickly record a full length in order to capitalize on their new found notoriety. Bishop Allen countered, scratch that, obliterated any chance of them releasing a half-assed, rehashed album by going on a very ambitious recording schedule. During 2006, they self released one new ep every month during the entire year. In the end, they recorded and released nearly 60 songs (9 of which were re-imagined and re-recorded for their new album), and while there are undoubtedly a number of clunkers in any set of 60 songs, they emerged from this exercise as a sharp, intelligent, and undoubtedly, more talented band.

Bishop Allen have issued a challenge on The Broken String. Hate these songs. Go ahead and try it, but I have to warn you, unless you’re mean spirited, cynical, contrarian, a metalhead, or my mom, it’s a damn near impossible task. Although my mom may prefer Shania, and the metalheads may prefer Maiden, everyone else will likely be smitten by these songs. Justin Rice’s vocals have a slightly raspy, but comfortable, worn-in feel, lending an immediate sense of familiarity. While the band assembled by Rice and long time bandmate, Christian Rudder, show themselves to be very adept at a variety of styles that range from sparse to grand and near everything in between without succumbing to either the ills of genre hopping or everything but the theremin arrangements. “Rain” and “Click, Click, Click, Click” are numbers tailor made for head bopping and hand clapping. Touches of trumpet and flute punctuate “The Chinatown Bus,” while well placed strings push and pull the dramatic “Flight 180.” “Shrinking Violets” feature banjo and woodwinds, and it’s a trumpet and Spanish guitar that make “Like Castanets” a yankee fiesta. Bishop Allen can even kick out a rockin’ jam when they want to, as they turn up the guitars for “Middle Management,” a number that recalls vintage British pop bands like The Kinks.

The more I listen to The Broken String, the more I want to take back my previous statement that this album is for everyone but metalheads and my mom. If a metalhead ever wanted to get laid with a non-metal babe they could use a disc like this one, and I’m sure that if I tried hard enough, I could even get my mom to listen more than once. A pop album this good needs as many ears as it can get.

Bishop Allen’s The Broken String is an 8 out of 10 on The Rockometer.