Warning: "continue" targeting switch is equivalent to "break". Did you mean to use "continue 2"? in /nfs/c06/h01/mnt/88637/domains/blog.irockcleveland.com/html/wp-includes/pomo/plural-forms.php on line 210
 I Rock Cleveland I Rock Cleveland | From The Vaults of I Rock Cleveland: Party of Helicopters

From The Vaults of I Rock Cleveland: Party of Helicopters 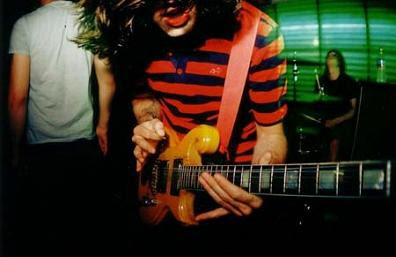 With the news that Party of Helicopters are playing a reunion show at the Lime Spider in Akron on Wednesday, August 29th, it’s a good time to take a quick look back at their 2003 rock monster, Please Believe It.

If you want to know what Kent’s Party of Helicopters didn’t sound like, check out this review from Pitchfork in 2003 for Please Believe It:

Raising the headphones to my skull for my first listen to My Bloody Valentine’s Loveless, I was struck by the taste of a heavy mousse or a rich pastry: I discovered the capacity of directed sound to inform an otherwise disconnected gustatory sensation. I searched out other experiences, finding that classical music whets my appetite for small portions of vegetable dishes and rare Japanese cuisine served on an asymmetrical jade plate. Jazz makes my mouth dry with the odor of cigarettes and a hard drink. Rock ‘n’ roll– and nearly all of its substituents– leaves an aftertaste of mostly carnal delights; a bleeding porterhouse, or at times a more elegant filet, wrapped in bacon and topped with horseradish sauce. There are notable exceptions to these corporal delicacies though, as rock ‘n’ roll has also given birth to the bubblegum-and-marshmallow-flavored emo-core scene, the Spam-laden rock/punk-revival and the saltwater taffy of electro/electro pop.

I think it’s pretty obvious that this dude was more interested in food, and lots of it, than he was in rock and roll. It’s hard to believe, but this is only the introduction and it gets even worse from there. Near the end of the review Party of Helicopters were compared to French toast and sausage covered in syrup.

Other reviewers had similar troubles. People dropped the “E” word, or they would make the same old My Bloody Valentine vs Iron Maiden (or insert any other popular metal band) comparisons. I could be wrong here, but as far as I know, Kevin Shields never wrote songs about ginormous American cars (“Delta 88”) or rocking a moustache (“The Toucher.”) If there was a contemporary that came close to their thick and complex groove-heavy rock sound, it would be Queens of The Stone Age, as POH vocalist Joe Dennis could rock a mean falsetto to match QOTSA’s Josh Homme, while guitarist Jamie Stillman laid down really f’n insane guitar riffs.

MP3:Party of Helicopters – Cover Me

Party of Helicopters broke up in 2004 citing a common rock and roll break up line: working their asses off and having nothing to show for it. Stillman currently plays drums in the Columbus metal outfit Teeth of The Hydra, while bassist Ryan Brannon and original drummer John Finley are both members of Beaten Awake.