Warning: "continue" targeting switch is equivalent to "break". Did you mean to use "continue 2"? in /nfs/c06/h01/mnt/88637/domains/blog.irockcleveland.com/html/wp-includes/pomo/plural-forms.php on line 210
 I Rock Cleveland I Rock Cleveland | The Mohawk Lodge 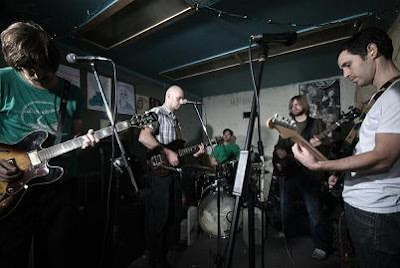 I am calling shenanigans on the liner notes for The Mohawk Lodge’s Wildfires. They claim that it was recorded at studios in Toronto and Vancouver. I know better. This music could only have been recorded in a remote outpost just outside a northern city like Yellowknife or Moose Jaw surrounded by polar bears and ice. Moose heads are hanging on the walls, a large fire place keeps them warm, generators keep the amps running and the beer cold, and the band just jams.

Ok, I’m a realist, so while recording in or around Yellowknife may be unlikely (I’ve seen Ice Road Truckers on TV and it can be rather hellish up north), I’d at least like to think that Mohawk Lodge wrote their songs at an honest to goodness lodge. I want to believe that this rustic Canadian rock is genuinely rustic.