The Stage Names by Okkervil River 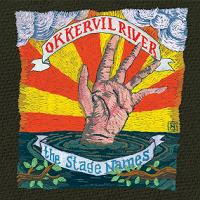 Let’s get one thing straight. Will Sheff does not care for the oft cited line that refers to his band, Okkervil River, as literary rock. You can call him a skilled lyricist, a compelling storyteller, or better yet, you can just call him the leader of a rock and roll band. In a recent interview with Pitchfork, Sheff seemed noticeably fatigued by the term “lit rock.” Neither does it do any service to someone who takes the craft of songwriting seriously, as it implies that literature is a higher art form than song, nor does it seem very complimentary to someone who is a musician as it infers that they’re too bookish, or too intelligent to rock.

Unfortunately, for Sheff and his band, The Stage Names will likely do very little in terms of eradicating that detested tag from descriptions of Okkervil River. Like its predecessors, the full length release, Black Sheep Boy and its companion piece, the EP, Black Sheep Boy Appendix, there is an overriding theme to these nine these nine tales. In place of the prodigal son narrative, is an extended cinematic tale set over nine numbers concerning the travails of entertainers and rock and rollers, that mixes both real-life and fictional characters whose mettle and morality are tested.

Now, I have to admit, I don’t particularly care for this thing called lit rock, and I’d rather not group Okkervil River in with other artists saddled with this tag, like The Decemberists or Sufjan Stevens. Besides, Sheff would go on to say in that interview, that he would feel as if he failed if Okkervil River wasn’t just good Rock ‘N’ Roll. He makes a damn good point. Reading the lyrics and attempting to decipher their meaning is cool and all, but if it doesn’t rock, then what’s the point of pressing play? So, instead of focusing on the lyrics, as countless others will undoubtedly do, let’s take Sheff’s words to heart and see if The Stage Names is just good Rock ‘N’ Roll.

The first thing you’ll notice on The Stage Names, is that it’s considerably lighter than Black Sheep Boy. I may even go as far to say that some of it’s even upbeat. Regardless of how closely you paid attention to the narrative in the Black Sheep Boy series, you could tell simply from listening to it, that it was a hauntingly painful tale that could only end in tragedy. Lead single, “Our Life Is Not a Movie Or Maybe,” is a rollicking piano and guitar number lifted skyward by the pomp of a thunderous bass drum, and the graceful choir backing Sheff in the chorus, giving it a joyous, almost rapturous feel. “Unless It Kicks” begins with a classic sounding punk guitar riff, one that’s similar to the Stiff Little Fingers’ “Suspect Device,” and gradually grows in scope, until the four minute mark where it undergoes a metamorphosis of sorts and unveils its true self with the flair of a fiesta.

There are other moments on The Stage Names where Okkervil River show a decidedly playful side. “A Hand to Take Hold of The Scene” takes its musical cues from the old sounds of Motown. “The Plus Ones” cleverly uses popular song titles and adds a plus one with lines like, “51st way to leave your lover”,’Nine miles high,” and “The one hundredth luft balloon.” While the highlight of the album, closing number, “John Allyn Smith Sails,” may sound like a ruminating downer, once the band get to the 2:30 mark and rip a rousing, triumphant verse of The Beach Boys’ “Sloop John B,” all that pain and misery seem almost manageable.

I’m at the end of the album and I can’t help but think of those old Miller Lite commercials where celebrities argued over whether the best part of Miller Lite was that it tasted great or that it was less filling. Plenty of people will tell you that they love Okkervil River because the lyrics are well written, but get a few beers in me and I’ll shout right back that the best part of Okkervil River is that they sound great.

MP3:Okkervil River – Our Life Is Not a Movie, Or Maybe

Okkervil River’s The Stage Names isn’t just an album for the well read, it’s one for the rockers too. 9 out of 10 on The Rockometer.