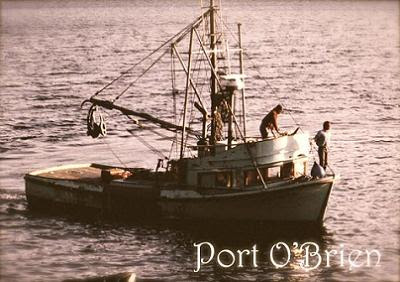 Like Mohawk Lodge, whose songs have a strong connection to the remote Canadian locations where they were written and recorded, Port O’Brien’s music has a similar tie to geography. Growing up, Port O’Brien’s Van Pierszalowski would spend his summers working on his father’s commercial salmon fishing boat in the waters off Alaska. When he wasn’t busy working 20 hour days, he would write songs inspired by both the scenery of the Alaskan wilderness, as well as the sense of isolation that comes with spending weeks on end at sea. Although, I wouldn’t call these songs sea shanties, the ocean does have a constant presence. While listening to their latest album, The Wind and The Swell, a collection of songs culled from their two previous self-released albums, it’s hard to imagine that these songs could ever exist without their natural inspiration. Sometimes these numbers, built with the simple combination of acoustic guitar, and ragged voice, are screamed with enough force to overcome the force of The Pacific, and other times, they’re content to nestle aside nature’s majesty.

If you like what you hear, you may want to save your “Hey, Luv Yer Tunes” myspace comments for the fall. 3/4 of the band are currently off fishing in Alaska. You can keep track of their adventures, on The Port O’Brien blog, and if you really, really wanted to send that “Hey, Luv Yer Tunes” message, you can get an address from their myspace where you can send a postcard.