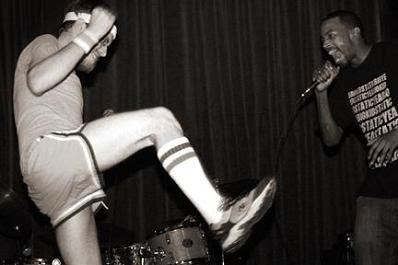 I’m not going to lie to you. This may be the most awesoment number you hear today. How awesome? So aswesome, that’s it’s more than deserving of its double superlative.

MP3:Yea Big and Kid Static – Run to the Facts

Last night I caught The Mae Shi with Yea Big and Kid Static at The Tower and it was f’n hot. So hot, that both bands performed the entirety of their sets in their skivvies. Part of me said, “Talk about a unique concert experience, you’ve got two fantastic groups playing some wild tunes in this shell of an old Chinese restaurant, too bad you didn’t have a camera.” While the other part said, “Do you really want pictures of six sweaty dudes in their skivvies?” It was that kind of night.

Yea Big and Kid Static were up first, and they performed some tunes off of their latest release HLLLYEA. The Mae Shi followed with some choice cuts of artsy, noisy, melodic punk off of their new disc HLLLYH. Notice the similarities between The Mae Shi’s upcoming album, HLLLYH and Yea Big and Kid Static’s HLLLYEA. HLLLYEA is a limited release where the Chicago duo rap over beeps, sweeps, squelches, and squeaks taken from HLLLYH. The show ended with the two sweaty dudes in their skivvies (Yea Big and Kid Static) backed by the other four sweaty dudes in their skivvies (The Mae Shi), for a killer version of “Run To The Facts,” a rap tune done over The Mae Shi’s “Run To Your Grave.”