Arrows Are All You Know by Mystery of Two 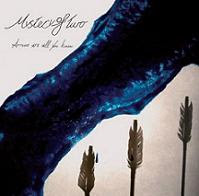 Mystery of Two
Arrows Are All You Know
Exit Stencil
2007

Mystery of Two is the sound of Cleveland. It’s the urgency of running red lights through the intersections where you’d rather not stop with full knowledge that big brother’s traffic cameras have an electronic eye on your license plate. It’s the paranoia of looking both ways, twice, as you make your way down darkly lit side street. It’s the knowledge that the only thing the city seems to be good at these days is poverty and killing. Mystery of Two embodies all the sh*t we take living in this town, as we scratch our way by with resiliency, determination, and pride. Mystery of Two is real, gritty Cleveland.

I don’t think it’s a coincidence that the band Mystery of Two are most often compared to, Pere Ubu, also emerged from a tumultuous time in Cleveland’s history. 1978 saw the release of Pere Ubu’s first full length album, The Modern Dance, as well as the city’s lowest point, when it entered default under the leadership of then Mayor Dennis Kucinich.

The tension that is so prevalent on Mystery of Two’s debut, Arrows Are All You Know, comes from two sources: Ryan Weitzel’s urgent and harrowing vocals and the dynamic duels between Weitzel’s guitar and Lonn Schubert’s bass. On close listen, it seems inconceivable that their sound doesn’t devolve into a series of dexterous, meandering, and maddening jazz exercises. Schubert’s bass lines scamper deftly up and down the scale in apparent indifference to Weitzel’s lead giving the listener a sense that they are always teetering on the verge of collapse. It never comes. Instead, with the aide of drummer Nick Riley, and liberal usage of the great tension releaser, aka the effects pedal, these numbers are able to thrive when they transition between heavy jams and static soaked Rock ‘N’ Roll.