Warning: "continue" targeting switch is equivalent to "break". Did you mean to use "continue 2"? in /nfs/c06/h01/mnt/88637/domains/blog.irockcleveland.com/html/wp-includes/pomo/plural-forms.php on line 210
 I Rock Cleveland I Rock Cleveland | "Anna Says" by Expecting Rain 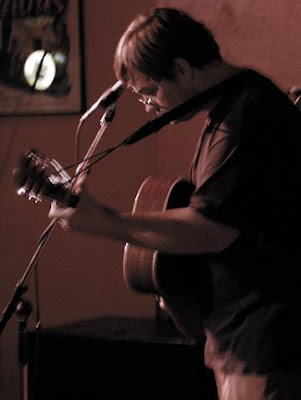 My first exchange with Expecting Rain went something like this, “Hi, we’re another fine band from Cleveland called Expecting Rain. We have all the country members from The Dreadful Yawns, and we don’t play country either.” Not that there’s anything wrong with that. I happened to be quite fond of the country Yawns.

For those of you not in on the joke, a few weeks back, I opened my track review for The Dreadful Yawns, “Don’t Know What I’ve Been On,” by quoting current Yawns guitarist Eric Schulte’s blog post where he wrote that the Yawns new material should eliminate any mentions of country, alt-country, The Byrds, or Wilco.

Anways, back to Expecting Rain. “Anna Says” comes from their forthcoming debut release, Saint Cecilia Sound System. The VU vibe on this number is immediate. So immediate, that after my first time through this track, I headed straight for AMG. I was convinced that either Lou Reed had written “Anna Says,” or someone else had already written an “Anna Says.” I found the original “Candy Says,” an “Andrea Says,” “Amanda Says,” “Grandma Says,” and a “Grandpa Says,” but no “Anna Says.” “Anna Says” is an Expecting Rain original and it’s fantastic.